It's not the first time I've asked this question.No one seems willing to answer it. :-)

Today's Golden Odie cartoon was published fifteen years ago in July of 1997. Back then eMail was cutting edge. If I did the cartoon today it would be a facebook joke.

How old is Uncle Drybones?
I'll tell you how old.In 1960 I lived in New York, and JFK was running for President. People mumbled about the threat of a Roman Catholic President. "How do we know that Jack Kennedy wont be controlled by the Vatican?! . . . by the Pope in Rome!!"In 2008 Obama was running for President, and I was visiting America on a speaking tour. Somewhere in Arizona someone mumbled to me "But he's black!!, who's going to vote for a black?!" The mumbler did not use the word "black" but employed a more colorful term instead.It's now 2012, Romney is running for President. Last week, an American on an overseas contract working here in Israel mumbled to me "I'm disappointed in Obama but I couldn't vote for Romney. Romney's a Mormon. They're a cult!" That's how old Uncle Drybones is!
I've been mumbled to before.

Today's Golden Odie cartoon was published on June 02, 1997. Fifteen years ago this month. According to Wikipdia:

"Iranian presidential election of 1997 took place on May 23, 1997, which resulted in an unpredicted win for the reformist candidate Mohammad Khatami." -more

So now they figure that the new President in Egypt wont be so bad
:-)

Here in Israel we've got a local chapter of the anarchist, anti-capitalist, "öccupy" movement, complete with violent demonstrations, police baiting, and "Social Justice" posters. According to the Jewish Telegraph Agency:

"A picture is worth a thousand words", so look at the photo below. In the foreground is the site of the latest terror attack on Israel. Behind the scene you can see the break in the fence through which the terrorists broke into Israel. Overlooking the entire scene is the watchtower and buildings of Egyptian Security forces!! 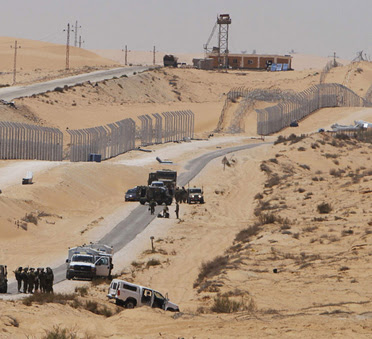 Today's Golden Odie cartoon was published in the Jerusalem Post on April 26, 1979. Egypt and Israel had just exchanged the Peace documents. The cartoon is about the American President, Jimmie (one-term) Carter, and "Zbigie" ( my nickname for his National Security Adviser Zbigniew Kazimierz Brzezinski). The joke was that Jimmy and his top adviser had no real idea about the Middle East and its peoples ... sort of like the current rsident of the White House.

Previous stuff about Europe at Dry Bones on Europe.

Today's Golden Odie cartoon was published ten years ago this month.To see other Dry Bones cartoons and postings about Europe, just click on Posts about Europe.

Last night the LSW (Long Suffering Wife) and I saw "The Great Buck Howard" , a 2008 movie, about a stage mentalist. it obviously affected my thinking today when I did this cartoon about what is coming to be called "distracted driving".

Today's Golden Odie cartoon was published in the Jerusalem Post on March 10, 1987, after Jonathan Pollard had been sentenced.At the time of this posting we're waiting to see if Shimon Peres can get President Obama to free Jonathan from his years of cruel and unusual punishment. Please click for some of my previous Pollard cartoons.Please click for the Facts of the Pollard Case.

I like to think of today's offering as a funny "test yourself" cartoon. On the other hand it could be seen as being in a new and disturbingly expanding category of Dry Bones cartoons. It's an "old guy living in the confusing future, trying to keep up" cartoon.Your thoughts?

Today's Golden Odie cartoon was published in the Jerusalem Post on February 24, 1982.Thirty years ago. Four months had gone by since Mubarak had become president of Egypt on 14 October 1981, after the assassination of President Anwar El Sadat. It looked like Mubarak was not going to try to lead his people to an acceptance of Israel as a friend and ally.Thirty years have gone by, the Israeli Egyptian Peace Agreement is in danger, Egyptian Jew-hatred is rampant, and Egypt has decided that it would be best for everyone if Hosni Mubarak would now conveniently die in prison.

Today's cartoon is a simple statement of fact.
* * *
BTW, have you noticed that they've stopped calling it Arab Spring?

Here in Israel we've just had a major political battle ...and the Prime Minister demonstrated the power of a broad government to actually govern!

The details are below as reported by the Jerusalem Post:

Knesset rejects Ulpana bill 69-22
"By a vote of 69-22, the Knesset has rejected the bill proposed for retroactively legalizing a number of West Bank outposts, including the Ulpana outpost.
Notable from the vote was the absence of Science and Technology Minister Daniel Herschkowitz and Public Diplomacy and Diaspora Affairs Minister Yuli Edelstein from the vote.
Both ministers had previously publicly declared that they would vote for the bill even though they would be fired from their cabinet positions.
Despite their public declarations, ultimately they absented themselves from the vote" -more

Today's Golden Odie cartoon was published in the Jerusalem Post on March 04, 1987, the day that Jonathan Pollard was to be sentenced.He was facing charges that, if he had been found guilty, could have put him in jail for several years. So he decided to take a plea bargain, admit to his guilt, forego a trial, and expect a lesser sentence. It is now twenty-five years after the sentencing, which opened a series of shocking betrayals. Pollard was given a life sentence by the Americans, Israel denied that he was their spy, and American Jewish Organizations (with a few exceptions) remained silent for years. Israeli President Shimon Peres now carries a plea for Pollard's long-overdue release, which he will present to President Obama in Washington D.C. So I decided to find and post today's historic cartoon. Please click for the Facts of the Pollard Case.

I really enjoyed drawing this cartoon!

Today's Golden Oldie is from June 1977. It was 10 years after the Six-Day War of June 67. Menachem Begin was the Prime Minister.The cartoon was about two items then current in the news. First was the refugees (from Vietnam) that we welcomed to the country. The second was the attempt to bar non-orthodox Judaism from flourishing in Israel.I picked the cartoon because the two hot topics in Israel today are again refugees and non-orthodoxy. Now, in 2012, we are being forced to discriminate between migrant Africans who are just slipping into the country illegally to find work and African refugees who've fled their native lands seeking refuge. As for non-orthodoxy, here's the latest from the Associated Press:

Apparently the mob may not be satisfied with a bone.
They want blood!!
The latest, according to CBS NEWS:

Life sentence for Egypt's Mubarak; sons acquitted"CAIRO — Former President Hosni Mubarak has received a life sentence for failing to stop the killing of protesters during Egypt's uprising. But he and his sons have been cleared of corruption charges, setting off protests for greater accountability for 30 years of abuses under the old regime.By nightfall on Saturday, a large crowd of up to 10,000 was back in Cairo's Tahrir Square, the birthplace of the uprising, to vent anger over the acquittals. Similar protests went on in the Mediterranean port city of Alexandria and Suez on the Red Sea."-more

Africans flee their native countries to pour across an international border into Egypt. This establishes them as refugees.When they then leave Egypt to infiltrate into Israel, they are no longer refugees, either legally or morally. They are economic migrants. The problem of the growing flooding into Israel of what is now estimated to be 60,000 African migrants will have to be faced by Jerusalem. And soon! This will, of course, be an opportunity for the Main Stream Media to launch attacks on Israeli "racism".