Hey, there’s way more than two sides to any story (at least in the Middle East) and in a curious way the Egyptian side of the tale is being ignored. The Egyptian government has been fighting Islamic terrorists for years. Terrorists have struck with devastating results, both in carnage and in damage to Egypt’s Tourism industry.

But for me, Egypt's problems took a personal twist when, in July 2005, just two months ago, the new Egyptian ambassador to Iraq was kidnapped and killed. The news was posted on Al Jazeera. The murder was a slap in the face to Mubarak’s regime, but it was a sad moment for those of us who knew Ihab al-Sheriff as a friend. He represented Cairo in Israel before being posted to the "new" Iraq. He was an intelligent, creative man, and an avid and talented photographer. He made many friends in Israel. I was one of them. His death was a shock to those of us who thought there was nothing left that could shock us.

Once, in his Tel Aviv office I took note of a lava lamp standing on his desk. He laughed, thinking that I thought of Egyptians as militaristic and had mistaken it for a model of an Egyptian missile. Two days later a limo from the Egyptian Embassy turned up at my home delivering the lava lamp as a present from Ihab, and presumably from the people of Egypt.

On a number of occasions I had argued with Ihab about the threat of the Islamic Terrorists and he lectured me about the dangers of "the Occupation," neither of us dreaming that the debate would eventually end with one of us paying the price.
Ihab took many photographs in Israel and confided to me that some day, when he retired from government service, he wanted to publish a book of photos entitled Israel through the Eyes of an Egyptian.

Then later, in the same month that Ihab was murdered, the Islamic terrorists carried out a successful attack on Egypt's Sinai resort hotels.

Now the terrorists in Gaza have a border with Egypt that is neither guarded by Israeli troops nor blocked by Israeli Settlements . . . and I just began to wonder what that means to President Mubarak and to the future of a secular Egypt.

In the Dry Bones cartoon I drew the face of Mubarak, but the Egyptian I was thinking of was my friend Dr. Ihab al-Sheriff. 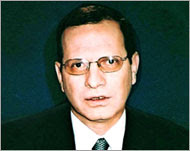