Today's cartoon is a twin lecture.

The Drive to Jerusalem 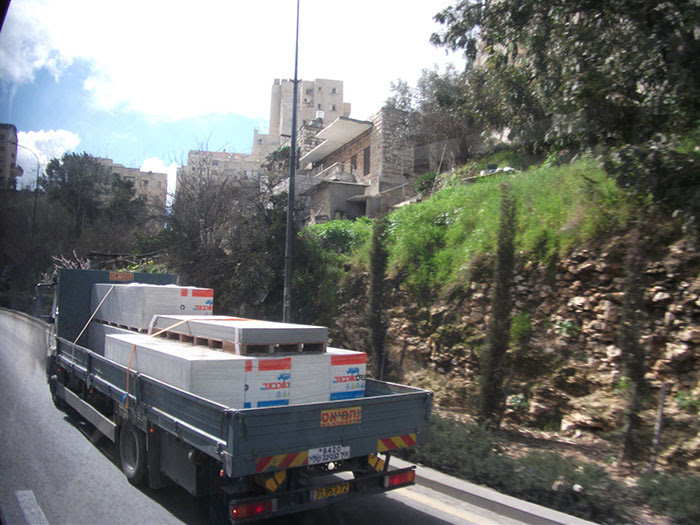 This is a photo taken out of the window of a bus traveling up to Jerusalem. The photo was taken a few days ago by the LSW (Long Suffering Wife). The past few days she and I have taken turns travelling the road to and from Jerusalem. The reason is that our printer is in Jerusalem and we need to do final color checking of the proofs of the Dry Bones Haggadah. After that we'll be ramping up to market the Haggadahs for Pessach 2014 (Next Year in the Marketplace!) As you may know, a group of fans and friends funded the creation of the Dry Bones Haggadah through Kickstarter. I have been been hard at work trying to create a masterpiece and the LSW has pitched in big time.
* * *
If all goes well I'll post a picture of the Haggadah's cover later this week!
* * *
Meanwhile, here's page 80 of the Haggadah which shows the drive to Jerusalem:

He didn't quit. He was fired?

The holiday is a whacko event which will, this year, coincide with another whacko event; the putting together of a coalition government.

Not so yummy. Hard to swallow.

"In 1997, Ilan Ramon became Israel’s first astronaut and was selected to be the only Payload Specialist during NASA Mission STS-107 aboard the Space Shuttle Columbia. He spent 15 days, 22 hours and 20 minutes in space conducting more than 80 experiments with his six crewmates. Upon re-entry to Earth’s atmosphere over Texas air space, the infamous Columbia shuttle exploded tragically on February 1, 2003 just 16 minutes before its scheduled landing time." -more

Today's cartoon has an interesting structure. The wordless punchline makes the cartoon for me.

Obama and the Middle East

-The President's first Presidential visit. In a major speech from Cairo, he reached out to the Moslem world.

I, of course am not saying that the President is, or was, in any way, responsible for the unrest, but I just hope that on this, his second visit to the area, he's not planning to make any major speeches.

As some of you know I've got plans to bring Chinese and Israelis together as parallel inheritors of Asia's two parallel ancient civilizations. It's called the Dry Bones Project. Our first effort is to produce a series of Dry Bones graphic novels in modern Chinese about Chinese college students, time travel, and the ancient land of of Israel.But right now it's the Chinese New Year, so we decided to draw a New Years Card featuring Li Chao and Zhang Wei, the two time-traveling stars of "Message from Kaifeng". For a larger version of the New Year's Card click on Big CardSo Happy New Year to our Chinese Brothers and Sisters!

This fracking story seems to be surfacing again. The last time I did a cartoon about this was in 2011. In that 2011 posting there's a link to the original news item which claimed that what we've got is not a fracking technology! Confused? Don't be. Check out the original shale post.

Israel and the Nations

As many of you loyal Dry Bones fans out there know I've been working on a Dry Bones Haggadah. My usual task is to draw cartoons for people to read today, Writing a cartoon for a Haggadah means writing a cartoon that ( we hope) will be read by a future generation or two.Today's cartoon is one that I did for the Haggadah.

The story of Israel's supposed action to prevent sophisticated weapons getting to the murderous terrorist gangs on our borders is nothing new. Neither is the world's shock at our determination to stay alive and to prosper in our little country.

Cartoons are oten infected by antisemitic viral images. For further info, go to a secret site I've set up to explain. The link is secretcodeshiddenwar.com