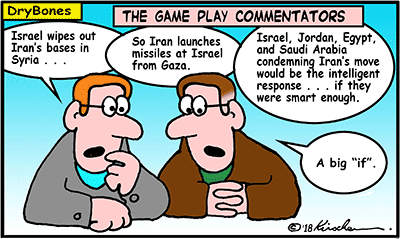 The Persians invented chess.
We, and our new Sunni Arab allies must be smart enough to recognize and counter clever Iranian (Pesian) game-play.
Are we?
Who knows? To follow developments I decided to create two new characters. I call them the "game play" commentators. 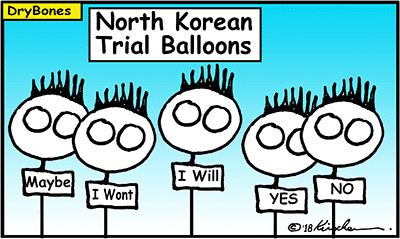 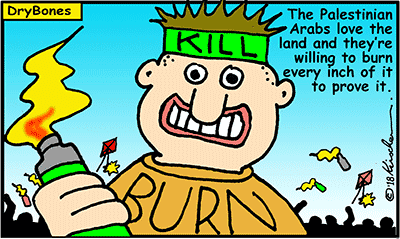 A Hamas official on Wednesday acknowledged that 50 of the 62 Palestinians reported killed during Gaza border riots on Monday and Tuesday were members of the Islamist terrorist group, bringing the total number of known members of terror groups among the fatalities up to 53. According to Arutz Sheva:

Has Trump decided the PLO is dead and buried?
Israel condemns PLO lies but Trump contemplates PLO demise.
by David Singer
The historic opening of the American Embassy in Jerusalem has provided opportunities for Israel’s Prime Minister Benjamin Netanyahu to totally discredit the Palestine Liberation Organization (PLO) and President Trump to review the PLO as a suitable Arab interlocutor to negotiate with Israel on ending the Jewish-Arab conflict.
Addressing the large gathering of American dignitaries and Israeli public figures – Netanyahu declared:“The truth and peace are interconnected. A peace that is built on lies will crash on the rocks of Middle Eastern reality. You can only build peace on truth, and the truth is that Jerusalem has been and will always be the capital of the Jewish people, the capital of the Jewish state”PLO Chairman – Mahmoud Abbas - didn’t take very long to reply with an outburst against America that seriously questions the fitness of the PLO to resume negotiations with Israel since the PLO walk-out in April 2014:
"What we saw in Jerusalem today was not the opening of an embassy, but the opening of an American settlement outpost. Before we had settlement outposts with American help, but today we have an American settlement outpost in East Jerusalem."
The rift between Trump and Abbas just continues to widen.Not content with this salvo – Abbas claimed that the United States:"has removed itself from the political work in the Middle East as a mediator. It's no longer an arbiter,"
President Trump would not take kindly to this latest rejection by the PLO of America’s decades-old role as sole mediator in any negotiations aimed at resolving a dispute that has gone on for 100 years.For Israel – it was just the latest shot in a litany of lies that had its genesis in the 1964 Charter of the PLO - subsequently revised in 1968 – which still remain unamended despite false claims to the contrary.The 1964 Charter had stated in Article 24:
“This Organization does not exercise any regional sovereignty over the West Bank in the Hashemite Kingdom of Jordan, on the Gaza Strip or the Himmah Area. Its activities will be on the national popular level in the liberational, organizational, political and financial fields.”
Yet the 1968 Charter deleted this clause after Jordan and Egypt’s 19 years-occupation of these territories was ended in 1967.
The PLO had suddenly discovered an inalienable right to regional sovereignty in every square meter of these areas. Amazingly this claim has been swallowed hook line and sinker by the United Nations.
Such a recent claim is certainly novel and now must be weighed against Israel’s claim - whose roots in these territories were established 3000 years ago and can be visibly verified in 2018.The biggest PLO lies are contained in Article 20 of the 1968 Charter:“The Balfour Declaration, the Mandate for Palestine, and everything that has been based upon them, are deemed null and void. Claims of historical or religious ties of Jews with Palestine are incompatible with the facts of history and the true conception of what constitutes statehood. Judaism, being a religion, is not an independent nationality. Nor do Jews constitute a single nation with an identity of its own; they are citizens of the states to which they belong.”These lies have driven the PLO campaign to wipe Israel off the face of the map rather than negotiate a division of former Palestine where sovereignty in 78% is already vested in Jordan and 17% in Israel - the last 5% still remaining unallocated between Arabs and Jews.These PLO lies should have been shredded decades ago. They have proved to be the greatest obstacle to peace between Israel and the PLO. 1. Iran must declare to the IAEA a full account of the prior military dimensions of its nuclear program, and permanently and verifiably abandon such work in perpetuity.
2. Iran must stop enrichment and never pursue plutonium reprocessing. This includes closing its heavy water reactor.
3. Iran must also provide the IAEA with unqualified access to all sites throughout the entire country.
4. Iran must end its proliferation of ballistic missiles and halt further launching or development of nuclear-capable missile systems.
5. Iran must release all US citizens, as well as citizens of our partners and allies, each of them detained on spurious charges.
6. Iran must end support to Middle East terrorist groups, including Lebanese Hezbollah, Hamas, and the Palestinian Islamic Jihad.
7. Iran must respect the sovereignty of the Iraqi government and permit the disarming, demobilization, and reintegration of Shia militias.
8. Iran must also end its military support for the Houthi militia and work towards a peaceful political settlement in Yemen.
9. Iran must withdraw all forces under Iranian command throughout the entirety of Syria.
10. Iran, too, must end support for the Taliban and other terrorists in Afghanistan and the region, and cease harboring senior al-Qaeda leaders.
11. Iran, too, must end the IRG Qods Force’s support for terrorists and militant partners around the world.
12. Iran must end its threatening behavior against its neighbors — many of whom are US allies. This certainly includes its threats to destroy Israel, and its firing of missiles into Saudi Arabia and the United Arab Emirates. It also includes threats to international shipping and destructive — and destructive cyberattacks. 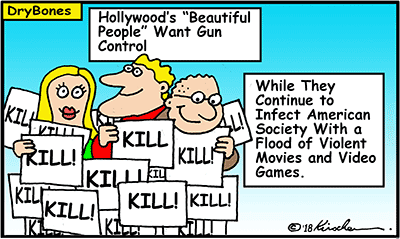 Gun Control? What America needs is media self control! 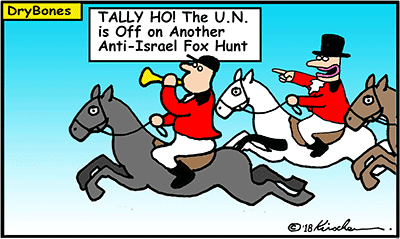 According to The Independent (UK): 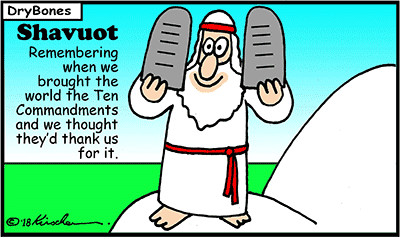 Shavuot 2018 will begin in the evening of Saturday, May 19 and ends in the evening of Sunday, May 20.
Shavuot (The Festival of Weeks) is celebrated after the counting of a week of weeks (49 days) from Passover. It is one of the three Jewish pilgrimage holidays. Shavuot commemorates the giving of the Law on Mt. Sinai to the newly freed Israelites after their exodus from slavery in Egypt. For any of us in the Western world, the image of our children is best expressed by the Peanuts kids. That's why I thought of them when trying to deal with expressing my horror at seeing Hamas using their kids to be killed in order to push their political goal of destroying Israel. 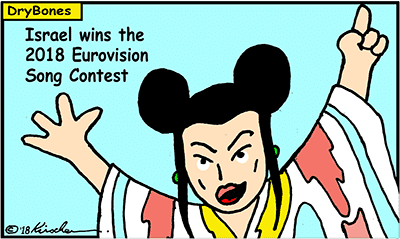 A week to remember! Get your commemorative mug!

The Official "Remember the 70th!" Mug!


It's the 70th anniversary of Israel's Declaration of Independence
. . . . and it's Yom Yerushalayim (Jerusalem Day)
. . . and the US embassy is about to open in Jerusalem!!
. . . and the Iranian Mullahs are in attack mode!. Yes, we are at an historic turning point in the life of our nation!! . . .and in years to come you'll want to remember this incredible moment.
That's why we've created the beautiful Dry Bones "Remember the 70th!" collectible mug! The mugs cost $15.39 each.
They are large (11 Oz) ceramic mugs with big, comfortable easy-grip handles. The mugs are dishwasher and microwave safe.

If you don't get one now, you'll be kicking yourself for years to come.
Don't miss this opportunity!

To see the other side of the mug (or perhaps buy one) just click on the photo. $15.39 gets you this Dry Bones Commemorative Mug 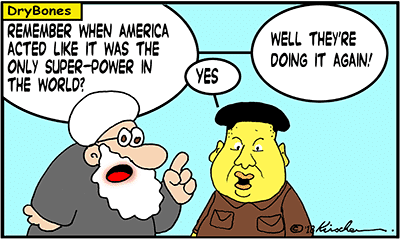 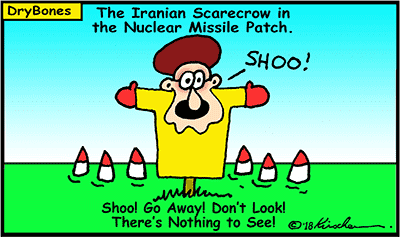 Iran is trying to frighten the West into not seeing what they're doing. It's the scarecrow scenario. JERUSALEM (AP) — Palestinian President Mahmoud Abbas issued an apology Friday following uproar over a speech he made this week that was condemned as anti-Semitic and dismissive of Jewish historical connections to the Holy Land.Palestinian officials said Abbas was under “tremendous” pressure from numerous diplomats and foreign ministers to apologize. The officials spoke on condition of anonymity as they are not authorized to talk to the media.Abbas, in remarks that were part of a lengthy speech to the Palestine Liberation Organization parliament on Monday, said it was the Jews’ “social function,” including money lending, which caused animosity toward them in Europe. He also described the creation of Israel as a European colonial project, saying “history tells us there is no basis for the Jewish homeland.”The Palestinian president’s remarks were sharply condemned by the United Nations, European Union, United States, Israel and others as perpetuating anti-Semitic stereotypes and falsifying history. 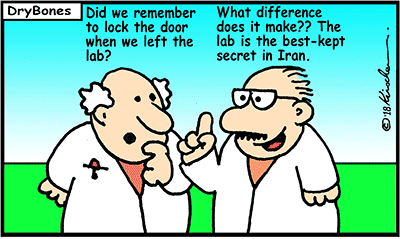 The LSW (Long Suffering Wife) and I are plagued with age-induced forgetfulness.
I thought about the Iranian scientists and I smiled. The next step was to draw this cartoon. 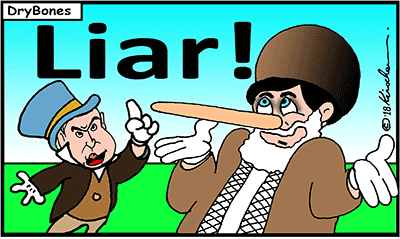 Netanyahu says Iran 'brazenly lying' after signing nuclear deal, moved documents to a secret location which he claimed shows Iran is "brazenly lying" about its nuclear weapons program and shows the country is not complying with the vaunted nuclear deal it signed in 2015.The information was obtained within the past 10 days, Israeli officials told Fox News. Netanyahu said the "half a ton" of files were moved to a "highly secret" location in Tehran after the deal was signed, and contained materials spread over 55,000 pages and 55,000 files on 183 CD's."These files conclusively prove that Iran is brazenly lying when it says it never had a nuclear weapons program," he said. Netanyahu displayed what he said was "an exact copy" of the original materials, which are now in a "very safe place" and include incriminating documents, charts, presentations, blueprints, and photos. -more