Today's Golden Oldie is from Israeli Independence Day 1999. Yesterday was Israeli Independence Day 2009, and I'm still in the post-barbeque euphoric stage of our national mood swing. I've decided to continue the party for another day ...at least.
* * *
FLASH!! Apparently I'm not the only one who wants to keep the festivities going. One of my favorite blogs, "Yid with Lid" just posted an Israel at 61 Blog Carnival! Check it out here!
* * *
Happy Birthday Israel!

Yesterday we marked Remembrance Day in memoriam of the nation's 22,570 fallen, both soldiers and civilians. The count is comprised of those who gave their lives for the State of Israel from 1860 and on, and includes members of the Jewish Brigade and all branches of the Israeli armed forces – the military, police, the Shin Bet and the Mossad. The past year has seen 133 new names added to the somber count. A sombre day of sadness and introspection.
* * *
And now, today, it's Yom Ha'Atzmaut, marking Israel's sixty-first birthday, a day of joy and celebration ...and our national picnic/barbeque day! Enjoy!! Hag Sameah! Happy Holiday! Live long and prosper!

Today's Golden Oldie is from 1988.I'm sick. I just popped a Coldex tablet, swallowed a couple of vitamin C pills, gulped down two aspirins, and staggered out of a sick bed to work on the blog. When I first found this Golden Oldie from 21 years ago showing Mr. Shuldig in bed with a heavy cold, it seemed wonderfully appropriate, but with the escalation of world-wide panic over Swine Flu, the craziness of the "outside world" has followed me right into bed! They don't let you enjoy being sick anymore! Yikes! Wheeze, cough, sneeze, sniffle ...

I woke up this morning with a stuffed nose, a wicked cough, a headache, and chills ...and then I read the papers, which headlined the newest pandemic threat!!?Stay tuned for further developments.

Having drawn Dry Bones for thirty-six years now, I've done plenty of cartoons about the meetings between our Prime Ministers and the powerful occupants of America's White House. ...and here comes another one!
* * *
For the cartoon to work it had to be set in America. The script would not work as an Israeli dialogue. So to get that across, I did not use any of my stock characters and wrote the punchline as Netanyahu is coming to Washington, and not that Bibi is going to Washington.

It really is comforting not to hear the American President being demonized by the Media. I was thinking about that, and about how nice it was to hear about the new puppy for the first family's kids, how pleasant it was it was to be told upbeat stuff about America's President. ...and then it occurred to me as to what had brought about this amazing change in American reporting. It was simple!

Today's Golden Oldie is from 1975. I picked it because today is Israel's Holocaust Remembrance Day. In the cartoon I had a finger-pointing character say that if Hitler were alive today, he'd be heading a UN committee. Last night, on the eve of Israel's Holocaust Remembrance Day, the finger-pointing character was Iranian President Ahmadinejad in Geneva, addressing the UN Committee on Racism. 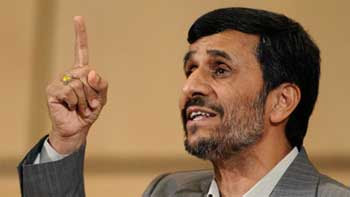 Ahmadinejad at the UN
on the eve of Holocaust Remembrance Day 2009.

A report in AllAfrica.com:

It is sad that decades of peace with Israel were not used by the Egyptian government to combat anti-Semitism and demonization of Israel. Egyptian authorities have now been forced to recognize the seriousness of the Iranian threat to the stability of their country. A viral threat which is based on that same demonization of the Jews and of the Jewish State.
* * *
Excepts from a report by Middle East Online headlined "Egypt press blasts Nasrallah as 'war criminal'"

"CAIRO - The Egyptian press on Sunday slammed Hezbollah leader Hassan Nasrallah as a 'war criminal who' should be put on trial. . . "A criminal who knows no mercy" cried the blood-red headline in the state-owned Al-Gomhuria which reserved the whole of its front page for an editorial bashing Nasrallah, repeatedly referring to him as "Sheikh Monkey.""Sheikh Monkey, we will not allow you to belittle our judicial symbols, for you are a highway robber, a pure criminal who has killed his own people but we will not allow you to threaten the peace and security of Egypt," editor Mohammed Ali Ibrahim wrote."You and your gang are terrorists and soon... the public prosecutor will issue details of an investigation into your terrorist organisation," he said.Al-Ahram newspaper, which is also state-owned, said Nasrallah's admission that Hezbollah is operating in Egypt provided grounds for prosecution."The admission by (Nasrallah) of sending agents into Egypt... puts him at the forefront of accusations and requires dealing with him under Egyptian law, or international law and issuing an (Interpol) red notice for his arrest," said editorial writer Ahmed Mussa." -more

American sea Captain Richard Phillips was safely rescued yesterday from the Somali pirates who had been holding him in a lifeboat off the coast of Africa. He had been held for five days. Gilad Schalit has now been held in Gaza for one thousand and twenty four days.Somalia and Gaza are part of the growingly dark parts of our world which have become post-national... with violent hostage-taking gangs dominating both areas. Hamas just has better PR.

Tonight is "Seder Night" ... the first night of Passover. Why is this night different from all other nights in the whole year? Good question, you'll get the answer tonight.
Next cartoon on Monday April 13. 'Til then...
Have a Happy Passover!
Pessah Sameah!

At Passover we are asked to see the story as if we had each been there ourselves. And since we marched out of Egypt and into the desert, we have marched down through history, hounded by those who would destroy us, and hit with one plague after another ...the main result of which is that we have developed a sharp sense of humor.
* * *
Wednesday will be the first night of Passover. Why is that night different from all other nights in the whole year? Good question, you'll get the answer then. Pessah Sameah! Have a Happy Passover!

Like the crazed villagers in Frankenstein, the torch-lit pitchfork and ax-wielding blood-lusting pack prepares to attack the object of its hysterical fear. The terrified Jewish Defamers of Israel are eagerly joining the lynch mob.So how about you? Have YOU been sold the idea that our new Foreign Minister is an evil monster?

Today's Golden Oldie is from June 1996.Last night I watched Bibi Netanyahu being sworn in as our Prime Minister on Israeli TV. Thirteen years ago, when I drew today's Golden Oldie, Netanyahu had just become Prime Minister for the first time. Our beleaguered and isolated little democracy had turned the reins of government over to the Likud leader. The mainstream media had primed the world to see him as a "hard-Liner" and a crazy extremist.Another one of those cartoons that I could run today ...if I were sure that Bibi's position was still the same.So what do YOU think? ...is it?

Yup. On Sunday, March 29, 2009, Palestinian officials in Jenin announced that they have disbanded a youth orchestra after it played for Holocaust survivors in Israel. The youth orchestra was founded three years ago and was called "The Strings of Peace". The group began their concert with an Arabic song called We Sing For Peace.The story in the BBC is here. The NY Times report is here. 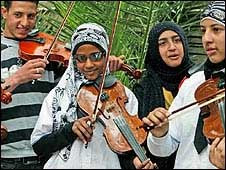 The Strings of Peace