The announcement was made two days ago.
Here's the story from the AFP:

"WASHINGTON (AFP) — White House hopeful Barack Obama, seeking to burnish his foreign policy credentials, announced Saturday he would visit major US allies in the Middle East and Europe before the November election.

The Democratic senator plans to discuss terrorism, nuclear proliferation and climate change when he speaks with the leaders of France, Germany, Britain, Jordan and Israel, his campaign said.

"This trip will be an important opportunity for me to assess the situation in countries that are critical to American national security, and to consult with some of our closest friends and allies about the common challenges we face," Obama said in a statement.

The campaign did not divulge any dates, but the trips will likely take place this summer before the race between Obama and Republican rival John McCain intensifies after party conventions in August and September." -more

Presbyterians in America held a week-long conference this past week. The meeting of Christians provided an opportunity for political radicals to continue their campaign against the Biblically-promised rebirth of Israel and the return of "His Chosen People" to "their Promised Land".The story is reported by the NY Sun in a piece headlined:
Presbyterian Church Proposals Could Reopen Wounds With Jews

"At least 19 Jewish organizations, ranging from Americans for Peace Now to the Zionist Organization of America, have spoken out against some of the so-called overtures to be debated at the week long biennial meeting of Presbyterians in America." -more

Today's Golden Oldie is a cartoon I did 21 years ago. Back then, in the summer of 1987, I was off on a speaking tour in America ...in Israel we have Mediterranean and Middle Eastern food and so, of course, while in the States I made a pilgrimage to a NY Kosher Deli. Last week, here in 2008, I was also off speechifying in the U.S.A. ...but a low carbohydrate diet now makes a bulging kosher NY deli sandwich and a heaping pile of potato salad a "no-no" for me! 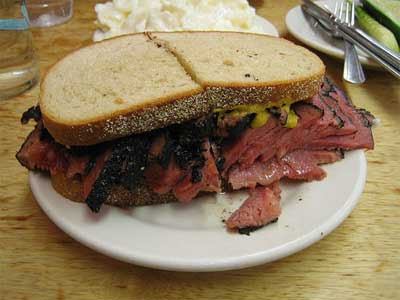 I'm just back from 10 days in America, where I found that my uneasiness about Obama was shared by lots of folks that I met. But given the circles I was moving in I was picking up the vibes of the post midlife crisis crowd. In the cartoon Mr. Shuldig makes a magnanimous, but insincere, suggestion that his nervousness might be related to his age.So tell me, what's your take on this feeling about Obama? and give us your age please. 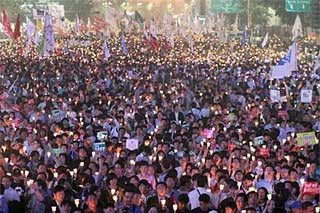 Here's the story as reported in English by a Korean source:

McCain has said that if he wins he'll be a one-term President ...in which case Hillary is back as a contender in only 4 years.If Obama wins then in 2012 he'll be the incumbent President and the Democrat candidate.But if Obama loses, and Hillary does not appear to have sabotaged his campaign . . .
* * *
I'm off to LA for the week of June 15th, I'm getting ready to leave, and yesterday was a holiday, so I'm pretty much in a state of confusion. So here's the deal: I'm posting a new cartoon today (Tuesday) and then another new cartoon tomorrow (Wednesday) and then the next cartoon posting will be on Tuesday June 24th.You'll have to do without a Dry Bones fix for the week of June 16th (unless you're in LA and want to attend an "Evening with Yaakov Kirschen" on behalf of CAMERA at Valley Beth Shalom in Encino CA. If you'd like to attend, the suggested donation is $5, the date is Tuesday June 17 (7:30 PM), and way to book a place is to call Isabel at 818 762 4473 or send an email to isabel@camera.org ...

Dry Bones in LA!
"Latest News and Other Jokes" ...that's the title of an "Evening with Yaakov Kirschen" which will be held on behalf of CAMERA at Valley Beth Shalom in Encino CA. So I'm off to LA next week for a few days. If you'd like to attend, the suggested donation is $5, the date is Tuesday June 17 (7:30 PM), and way to book a place is to call Isabel at 818 762 4473 or send an email to isabel@camera.org ...
But you'll have to RSVP by Friday 13th.

Sunday night will usher in this year's celebration of Shavuot, so there will be no cartoon on Monday while Israel shuts down for the holiday. Meanwhile you can soak up a lot of info about this cheese-eating holiday that celebrates both the new harvest and the ancient giving of the Law at Mount Sinai by checking out our previous Shavuot Postings. Hag Sameah! (Happy Holiday)

While rummaging around in my database of old Dry Bones cartoons I came across this one from 15 years ago this month. This Golden Oldie was published on June 20, 1993.When Israel expelled terrorists, the media went wild. When Egypt started hanging them it wasn't something to get upset about. Here's the news as reported (with understanding of the Egyptian position) in the NY Times six days earlier:

Egypt Executes a Terrorist In Drive on Fundamentalists
Published: June 14, 1993
"In a sharpening of the conflict between the Government and the Islamic movement, Egypt announced today the first of what it said would be many executions of militants convicted of terrorism.

The execution was the first of a member of the Islamic movement since five were put to death in 1982 for the killing of President Anwar el-Sadat.

Despite repeated confrontations since then, the Government of President Hosni Mubarak had appeared to go out of its way to avoid carrying out death sentences against Muslim militants who seek to take power here.

Twenty-two Islamic militants have been condemned to death in the last six months, and more such sentences are widely expected. Egyptian officials said the execution today reflected a decision to carry out "all death sentences" against those convicted by military courts. 'Dialogue' Effort Abandoned

Mr. Mubarak moved cases of accused fundamentalist terrorists from civilian courts to military courts under an emergency law that allows few appeals. The move came earlier this year after the Government abandoned a faltering attempt to have a "dialogue" with some militants.

Government-owned newspapers said the hanging in Alexandria today of Sherif Hassan Ahmad Mohammed, who had killed a police officer, was the first of many executions to be carried out "in the next few hours and days." -more

These days the anti-Zionist, anti-Israeli bias of the media is so accepted that it doesn't rate a cartoon alert.For more info on how the media (mis)treats us and to find out what you can do about it, check out our friends at CAMERA, the Committee for Accuracy in Middle East Reporting.

Olmert and the Envelopes of Cash

Much of the Israeli fascination with the unfolding saga of corruption in high places is focussed on the "envelopes".

Driver: I personally handed Olmert envelopes stuffed with cash
"Avi Sherman, a limousine driver who drove Prime Minister Ehud Olmert during his tenure as mayor of Jerusalem, testified to police on Thursday that he personally gave Olmert envelopes stuffed with cash from several businessmen, among them U.S. businessman and fund-raiser Morris Talansky and American billionaire Daniel Abraham". -more

Olmert 'took cash in envelopes'
"Mr Talansky raised thousands of dollars at meetings in New York
A US businessman has testified he gave envelopes full of cash to Israel's prime minister but said he did not seek or receive any favours in return.
Morris Talansky told an Israeli court he did not know how the money was spent, but linked it to Ehud Olmert's "love" of "expensive" luxury goods.
Police are investigating whether the PM took up to $500,000 (£250,000) in bribes or illegal campaign donations." -more

* * *
Kosher Nostra is a play on Cosa Nostra, the proported "real name" of the Sicilian Mafia. -more
* * *
So is the Olmert and the Envelopes story big where you live?

Back in June 1998, only ten years ago, we announced that we would allowed Hamas "religious" leader Sheik Yassin back into Gaza! On June 15th today's "Golden Oldie" was published. Eleven days later on June 26, the NY Times ran the following story:

Hamas Sheik Back in Gaza After Touring Arab Capitals

" Sheik Ahmed Yassin, the founder and spiritual leader of the militant Palestinian group Hamas, returned to Gaza tonight after a medical trip that turned into a triumphant and reportedly lucrative four-month tour of Arab capitals.

The 62-year-old Islamic cleric, a quadriplegic with failing eyesight and hearing, was released from an Israeli jail in October in exchange for Israeli agents seized after a botched attempt on the life of a Hamas official in Jordan.

At his home in Gaza City, the sheik's motorcade was greeted with festive gunfire from Hamas bodyguards, and a placard reading, ''The Islamic nation is proud of Sheik Ahmed Yassin, who returned to the nation its dignity and glory, and from his wheelchair moved the whole nation.''

In a brief statement to about 100 followers, the sheik said: ''I am returning after several months to Gaza, to my Palestinian homeland. We are determined to continue the struggle. We will never accept the occupation of our homeland, and we will use all our means until we remove the occupation and our people go back home.''

The sheik's return had been a matter of some suspense, as Israel debated whether to allow him back or not after a tour in which he issued militant statements and reportedly netted tens of millions of dollars for his Islamic movement, which adamantly opposes the Palestinian peace agreements with Israel and whose secretive military wing is responsible for most of the suicide bombings in Israel in recent years." -more

Here are the Latest Headlines:

Under a cloud, Israel's Olmert to hold U.S. talks-more

For me, watching Olmert remain in power has become spellbinding. It really is like some twisted version of the TV show "Survivor" ...in which the more that people want him off the show, and the more unpopular he becomes ...the more he stays on!

Monday is Jerusalem Day!
Jerusalem Day is celebrated every year on the 28th of the month of Iyar (in the Hebrew calendar). This year the holiday date falls on June 2. The first Jerusalem Day was celebrated on May 12 1968 to mark the first anniversary of the uniting of divided Jerusalem in 1967. Monday is the 40th Jerusalem Day ...and is an important part of the "Israel at 60" celebrations.Hurry, hurry, Get your souvenirs!
Can you think of a better way to remember this year than to grab a couple of Official Dry Bones Commemorative souvenir Mugs? These mugs are a limited edition and will only be available until the end of 2008. After that, you'll have to go to eBay and pay some outrageously inflated price. Right now these mugs are priced at only $19.95 each. They are large (a hefty, 15 oz.) ceramic mugs with big, comfortable easy-grip handles. They are dishwasher and microwave safe. If you don't get one now, you'll be kicking yourself next year. Click on the photo below for more info, to take a peek at the other side (which is even prettier), and perhaps to buy one. 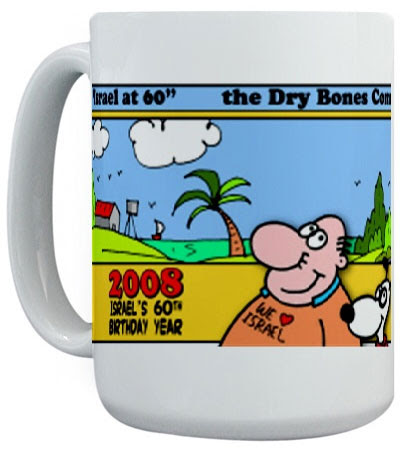 Only $19.95 for this Dry Bones Commemorative Mug?