I'm off to America to attend the National Cartoonists Society's Annual Awards Weekend, where I'll be giving a presentation on the history of Dry Bones. Regular postings will, I hope, resume on Monday June 14.

I'm off to America to attend the National Cartoonists Society's Annual Awards Weekend, where I'll be giving a presentation on the history of Dry Bones. Regular postings will, I hope, resume on Monday June 14.

We've been flooded with requests for posters and t-shirts with the No Nukes cartoon, so here goes! We've put together a Large Poster, a men's T-Shirt, and a woman's T-Shirt. Click on one of the pictures if you're interested in spreading the word.
Large Poster $27.99 each. Click on the photo below for more info and perhaps to buy one. 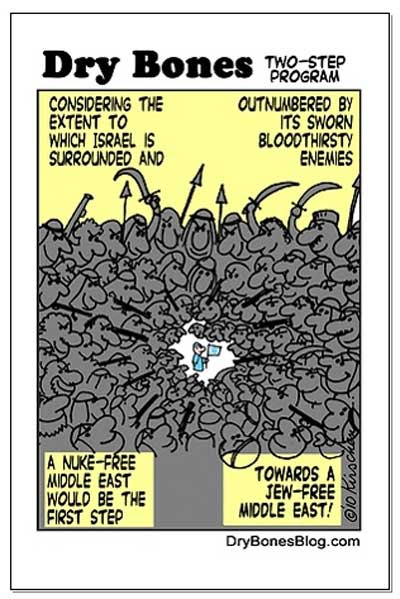 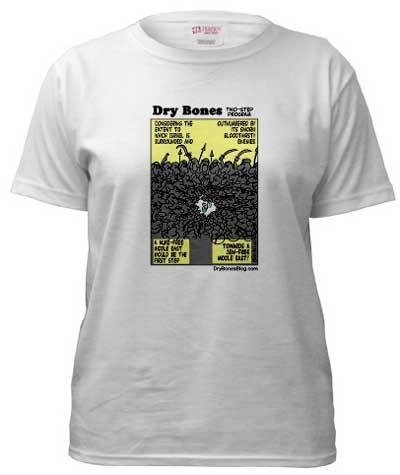 What happened? The architects of Obama's Mideast policy now claim not to know. It's like the joke about the motorcycle cop who stops a speeding car and when he asks who was driving, the people in the car say "nobody, we were all in the backseat!" 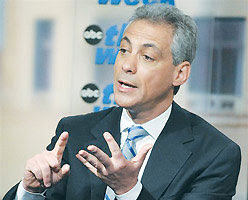 Today's Golden Oldie is a Dry Bones cartoon done 35 years ago in 1975.
It's one of the cartoons I'm including in a presentation I'll be making next week at the the National Cartoonists Society's Annual Awards Weekend in America. The 'toon is about oil (the cooking kind).
* * *
Tonight is Shavuot Eve. Next cartoon on Friday, May 21. Happy Shavuot!

And the three to ten-year-olds?
According to CNN:


Parents using smartphones to entertain bored kids
"Harried parents for years have relied on glowing electronic screens -- TVs, video games, computers -- to entertain children in the home. Now more and more parents are discovering smartphones' similar ability to engage squirmy kids at restaurants, in the car and anywhere else where youngsters grow bored.Almost half of the top 100-selling education apps in the iTunes App Store were for preschool or elementary-aged children in November 2009, according to a content analysis by the Joan Ganz Cooney Center, which promotes digital media technologies to advance children's learning.Expert Carly Shuler says the reason for this -- assuming the majority of 3- to 10-year-olds don't own their own phones -- is because adults are taking advantage of the smartphone's ability to act as a mobile learning or entertainment device for their children." Shuler, a fellow at the Joan Ganz Cooney Center (part of the Sesame Workshop) calls this phenomenon the "pass-back" effect -- as in parents passing their phones back to their bored kids.Shortly after the iPhone came out, Shuler said she noticed children as young as 3 years old playing with the shiny devices. -more

Today's Golden Oldie is from 15 years ago this month. If I hadn't drawn this 15 years ago, I could have done it today. But 15 years ago the "two important facts" were whispered ...it was a subversive thought. These days, the two facts have become more and more obvious to everyone.

I did this cartoon on Sunday night.It thumbs its nose at Europe, laughs at their troubles, and makes a metaphor out of the volcanic cloud of ash. This kind of prideful behavior is, of course, a big no-no in Jewish culture. Acting with the degree of boastfulness that I exhibited in this cartoon simply invites cosmic retribution. A dangerous act like mine has a name. It's called a "kina hora". After doing the cartoon, on Sunday night I went to bed. The next day the news broke on Arutz Sheva:

Volcanic Ash Heads for Israel, Some Flights Delayed "The volcanic ash that threw international travel into an upheaval last month is expected to reach Israel Monday night, where at least two flights have been delayed. A flight from Barcelona is due to land late Monday night after a 20-hour delay, and a plane from Barcelona also was delayed.The Israel Airports Authority (IAA) met in emergency session Monday afternoon and announced that it will not close the country's airspace, relaxing travelers who heard Minister of Transport Yisrael Katz say earlier in the day that Israel would shut down the airport if forced to do so" -more

Today's Golden Oldie is a Dry Bones cartoon I did 28 years ago in 1982.Tonight is erev Yom Yerushalayim, the eve of Jerusalem Day, which marks the happy day in 1967 when Jerusalem was liberated and thus became open to all faiths. It reminds us of the Double Standard exhibited by a world that is not bothered by the Saudi closing of the "Holy City" of Mecca to all non-Muslims. Below are a few Saudi highway signs. 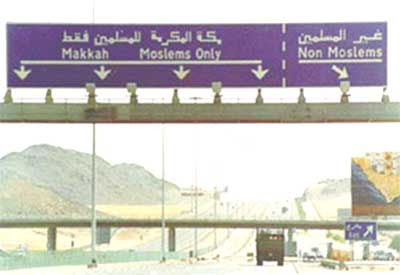 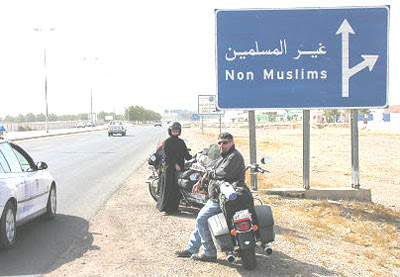 Yedioth Ahronoth investigation reveals man preaching human rights, who authored scathing report against Israel's operation in Gaza, sent at least 28 black defendants to gallows as South African judge under Apartheid regime "...Even when it came to far less serious offenses, Goldstone sided through and through with the racist policies of the Apartheid regime. Among other things, he approved the whipping of four blacks found guilty of violence, while he acquitted four police officers who had broken into a white woman's house on suspicions that she was conducting sexual relations with a black man – something considered then in South Africa as a serious crime. In another incident, Goldstone sentenced two young black men merely for being in possession of a video tape showing a speech given by one of the senior officials in Nelson Mandela's party. ...In response to sections of the study presented to him, Goldstone said that he has always been opposed to the death penalty, but because was acting within a legal system in which the death penalty exists, his hands were tied. He also claimed that he was obligated to honor the laws of the country, even under Apartheid rule, and could not find enough mitigating evidence to spare the defendants from execution. Goldstone claimed that he never discriminated against black defendants and acted to the best of his abilities to act fairly, though he was sometimes morally opposed to the laws he was upholding. He noted that he was equally committed to maintain equality and to uphold the law, two principles that often clashed. Dershowitz: That's what Mengele said too. Following the revelations, prominent American lawyer Alan Dershowitz compared Goldston'e defense to that of Nazi war criminals. "Goldstone took a job as an apartheid judge. He allowed dozens of black people who were unfairly tried to be executed," Dershowitz told Channel 2 TV. "You know, a lot of people say we just followed the law, German judges… That's what (German SS officer and physician Josef) Mengele said too. That was Mengele's defense and that was what everybody said in Nazi Germany. 'We just followed the law.' When you are in an apartheid country like South Africa, you don't follow the law," Dershowitz added." -more

Yes, Stephen Hawking was just quoted by the London Sunday Times as saying:

“If aliens ever visit us, I think the outcome would be much as when Christopher Columbus first landed in America, which didn’t turn out very well for the Native Americans.” -more

Hawking sees it as a possible Culture Clash rather than as possible Species Revulsion.

Stopping an Israel-India deal in 1998? According to Radio Islam:

"according to Defense News, Washington particularly targeted Israel because of a number of sensitive arms deals with India on the horizon. Sources said that America was concerned over a possible $1 billion deal to provide India with an advanced phased-array early warning system called Falcon, which is installed on a Russian-manufactured Ilyushin-76 plane. The system is completely Israeli developed, so Washington does not have the automatic veto it does over other weapons systems - like the Arrow anti-ballistic missile - which contain US-made components or which the US helps fund. Indian Ambassador Ranjan Mathai confirmed that India is purchasing military equipment from Israel, but declined to go into details." "...There is no conflict between us. Nations are known to agree to disagree," said one official. There were suggestions that America is trying to tie Israel's hands so that it can sell to India itself. US officials said that they are confident Israel wouldn't sell weapons or weapons systems that would aid in India's controversial nuclear program or in some way be redirected to enemies of the state. "I'm confident we reached an understanding," said one US official." -more

An Israel-China deal stopped by the U.S.? According to The Arms Control Association in 2000:

"Aiming to end a prolonged public dispute with Washington, Israeli Prime Minister Ehud Barak told President Bill Clinton on July 11, the first day of a U.S.-brokered Middle East peace summit, that Israel would not complete a 1996 deal that would have given China its first advanced airborne early-warning (AEW) capability. Although upsetting China, the Israeli cancellation averted U.S. congressional threats to withhold aid to Israel if the AEW deal went forward. Washington and Tel Aviv are now holding high-level talks on strengthening their "strategic relationship" and avoiding similar future conflicts.The United States went public last fall with its long-held opposition to the estimated $1 billion deal for four Phalcon radar systems when the first Russian-supplied plane destined for China arrived in Israel to be outfitted with the system. Designed to provide simultaneous long-range tracking of multiple air and surface targets, the Phalcon radar system, according to U.S. government officials, could impact the Taiwan Strait military balance in China's favor.Citing the "need to help intimate relations" with the United States during and after the summit, Israel, the largest recipient of U.S. foreign assistance, publicly announced on July 12 that it would stop implementation of the Phalcon deal." -more

And now a South Korean deal with Israel has just been stopped by America? According to HaAretz:

U.S. allegedly elbowed Koreans out of Israeli power plant deal "A tender to build a power plant in Rotem seems to have created an international diplomatic incident. A group that includes the South Korean company Posco and the Japanese company Mitsubishi had been poised to announce this week that it won the tender to build the plant on behalf of OPC, a company controlled by the Israel Corporation. But after the U.S. embassy allegedly got involved, and American officials met with Israel Corp. executives, sources told TheMarker, the company announced it would reopen negotiations with the American bidders, Woodgroup and General Electric." -more

Today's Golden Oldie is a Dry Bones cartoon done 20 years ago, in 1990.Yes, we're waiting for another Summer, with all our protective gear ready. When I was a kid, a good sunburn was the way we celebrated our first trip to the beach of the season. The real fun was slapping other kids on the back (when you knew they had a "burn"). In a day or so we'd start to "peel". If it was more than you could take there was "Noxzema" to sooth the pain ...or maybe a cornstarch bath. 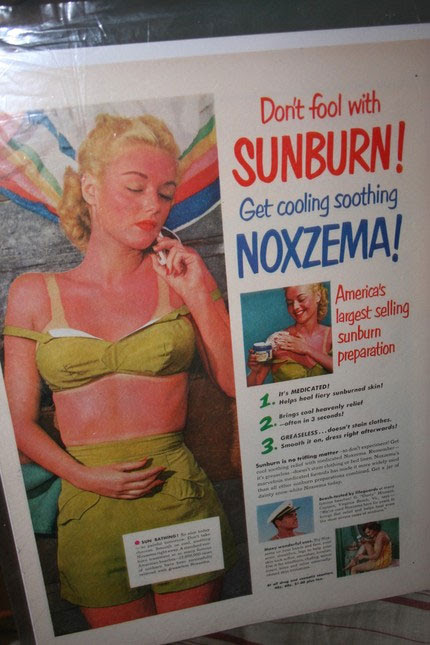 Israeli officials: Obama to call world summit if Mideast peace talks fail
"U.S. President Barack Obama has told several European leaders that if Israeli-Palestinian talks remain stalemated into September or October, he will convene an international summit on achieving Mideast peace, senior Israeli officials told Haaretz on Thursday. The officials said the conference would be run by the Quartet of Middle East peacemakers - the United States, European Union, United Nations and Russia - in a bid to forge a united global front for creating a Palestinian state. The summit, they said, would address such core issues as borders, security arrangements, Palestinian refugees and the status of Jerusalem. Obama is determined to exert his influence to establish a Palestinian state, the officials said, and several European leaders have vowed that the EU would support any peace plan proposed by Washington. Therefore, though so-called proximity talks are set to start in the coming weeks, Obama is already readying for the possibility that the indirect Israeli-Palestinian talks might reach a dead end.The U.S. proposal would likely be presented by the end of this year, the officials said."-more