That Thing We Do

In 2005 Israel had totally withdrawn from Gaza. Two years later Hamas took over and Israel was being hit by rockets. Today's cartoon is from then

A Rosy View of Gaza

The appeasers are freaking over Bibi's linking Hamas and ISIS.
"None so blind as those who will not see."

According to the Times of Israel:

Hamas kills 22 suspected ‘collaborators’
Executions part of crackdown following assassinations of several of its terror chiefs by Israel
"Masked Hamas gunmen on Friday afternoon killed seven suspected informants for Israel near a Gaza City mosque as worshipers were ending midday prayers, bringing the total number of alleged collaborators killed in the coastal strip during the day to 18, according to witnesses and Hamas media. On Saturday, four more alleged collaborators were killed, bringing the total in two days to 22.One witness said masked gunmen lined up the seven men Friday in a side street and opened fire on them. He spoke on condition of anonymity, fearing for his own safety." -more

According to the Times of Israel:

The horrifying beheading by ISIS is spreading to include soldiers, children, and more and more innocent victims.

A LOT is going on in the Cairo talks. We just don't know what it is.
But it is obvious that neither Egypt nor Israel can live with an armed and dangerous Hamas controlling Gaza.

An Egyptian/Israeli/Palestinian Peace?
There's only one problem.

The ignoring of the destruction of the Christian communities in the Middle East by the "Official Christian Churches" goes way back before ISIS. I drew today's cartoon back in 1997! 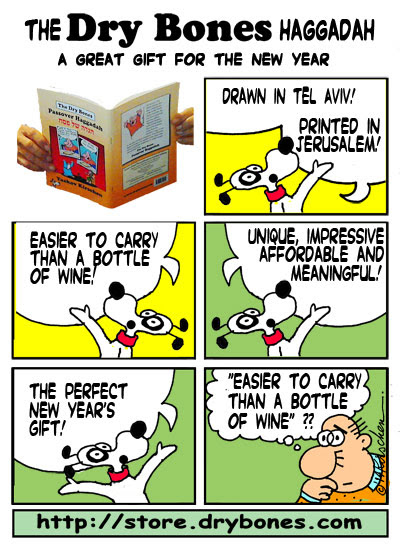 In this tense period both in Israel and around the Jewish world we seem to be both more together and more isolated than ever. Once again "they rise up against us." This coming New Year will be significant for the Jewish People. The High Holidays will soon be upon us. They begin with Rosh Hashanah (sunset of Wednesday, September 24, 2014) and end with the end of Sukkot(nightfall of Wednesday, October 15, 2014)The Dry Bones Haggadah makes a unique and perfect gift this year.
Check it out at our Dry Bones Store (the only place where they are for sale): http://store.drybones.com/ We, I and the LSW (Long Suffering Wife), mail the Haggadahs from our living room in Israel, so order now to give the Post Office time to reach you.

The terrified folks living under totalitarian terrorist rule usually demonstrate a remarkable degree of public support for their rulers. The twits who watch the interviews just don't get it!!

. . . and so the world is poisoned against us through the collusion between the terrifying terrorists and the fearful journalists.

"A snuff film is a motion picture genre that depicts the actual murder of a person or people, without the aid of special effects, for the express purpose of distribution and entertainment or financial exploitation." -more

"In the 2000s, use of the term "child abuse images" increased by both scholars and law enforcement personnel because the term "pornography" can carry the inaccurate implication of consent (or even harlotry) and create distance from the abusive nature of the material." -more

Negotiating behind closed doors and watching the border.

The War that Was

We don't know if the war is over yet but it's not too early to mull over some things we learned.

Today, August 5, 2014 is the holy day of Tisha Be'Av ("the ninth day of the Hebrew month of Av"). Tisha Be'Av commemorates the destruction of the First and Second Temples in Jerusalem and the subsequent exile of the Jews from the Land of Israel. The day also commemorates other tragedies which occurred on the same day, including the Roman massacre of over 100,000 Jews at Betar in 132 CE. Instituted by the rabbis of 2nd-century Palestine, Tisha B'Av is regarded as the saddest day in the Jewish calendar and a day which is destined for tragedy. -moreOur sages tell us that the reason for the destruction of the Temple was "Sinat Chinam" (Hebrew for the baseless hatred and divisiveness that often divides us.)
Interesting to note that THIS Tisha Be'Av we are totally united!

Islamism.
What's in a name?
Not much.

Terrorist tunnels snaking in under our borders and leading to hidden exits is a threat that Israel cannot and will not live with.