Everyone agrees that one of these candidates, if elected, would be a disaster for America. If you are an American voter, all you have to do is to decide which ...and then vote for the other guy.Happy Halloween,
and good luck to us all!

Today's Golden Oldie is from October 1994. Fifteen years ago this month. Once upon a time Halloween was a fun holiday for kids who went around playing pranks and begging for candy. Nowadays it's a big time commercial American holiday and nobody lets their kids go trick or treating on their own.We live in darker times.Happy Halloween

The harshness of the blunt text in today's cartoon is hidden by the pun/joke of the drawing. Humor can be a sugar coating for a bitter truth that has to be swallowed. So just call me the candyman.

Today's Golden Oldie is from October, 1999.
Ten years ago this month.
The story that prompted the cartoon?
Here's how it was reported in the LA Times:

Mars Probe Lost Due to Simple Math Error
By Robert Lee Hotz
October 01, 1999 in print edition A-1 "NASA lost its $125-million Mars Climate Orbiter because spacecraft engineers failed to convert from English to metric measurements when exchanging vital data before the craft was launched, space agency officials said Thursday.A navigation team at the Jet Propulsion Laboratory used the metric system of millimeters and meters in its calculations, while Lockheed Martin Astronautics in Denver, which designed and built the spacecraft, provided crucial acceleration data in the English system of inches, feet and pounds.As a result, JPL engineers mistook acceleration readings measured in English units of pound-seconds for a metric measure of force called newton-seconds.In a sense, the spacecraft was lost in translation.“That is so dumb,” said John Logsdon, director of George Washington University’s space policy institute. “There seems to have emerged over the past couple of years a systematic problem in the space community of insufficient attention to detail.” -more

* * *
Speaking of Golden Oldies, I just gave some Dry Bones stuff to Ofer Berenstein who is is a founding member of the Israeli Comic Book Readers and Collectors Society. He is a graduate student at Bar-Ilan University in Israel and is off to spread the word about Israeli comic strips and comic books. His first stop, apparently is the Library of Congress. Yikes! You can read about it here.

Today's cartoon deals with the grim prospects for international travel in the future. A personal point. I'm about to hop over to the States for a speaking tour on behalf of CAMERA, an organization that fights for accuracy in Middle East reporting in America. I'll be taking a plane and won't have to row.
At least not on this trip.

Fears of a financial collapse and the increasing need to find an alternative to gasoline powered automobiles got me to ask myself "what kind of technologies could come to our rescue?" And "what kind of changes are we going to have to make to our lifestyles?" Musing over the two questions resulted in the bittersweet humor of today's snide cartoon. Your thoughts?

Today's Golden Oldie is from October 23, 1984
...exactly 25 years ago today! Back then I was frightened by the government's inability to deal with the economic crises. Back then the fumbling government was Israeli and not American and the problem was inflation not recession ...but other than that, it's obviously a cartoon that could be run again today!

There's been so much news about the economic crisis that I began to entertain myself by thinking up future "we were so poor that..." jokes. The kind that the kids who survive the coming financial disaster would one day tell to their grandchildren. The first one was "We were so poor that we snuck into Mexico to find jobs." When I realized that it could be morphed into a Dry Bones cartoon I dropped the game and drew the cartoon.But hey, maybe you could think up a few future "We were so poor" jokes?

Today's Golden Oldie is from October 14, 1999.
Ten years ago this month. An October Coup had just put General Pervez Musharraf, Chief of Army Staff in charge of the nuke-armed Muslim country. A lot of people worried.
I drew a cartoon.

We live in the reality that the media creates for us. O.J.'s first trial was world shaking. His second was a ho hum. Israel is an outcast because of how we've been cast by the media. And now the media is telling us that "the fears that they've given us are something to be afraid of and, by the way, this could be a replay of 1929."Maybe this is all some big experiment and they're testing our intelligence?

After publishing a previous cartoon on this topic I got an email from a reader who wrote to ask if I was a vegetarian. I am not. What I am is simply a guilt-ridden carnivore. So guilt-ridden that I decided to do another cartoon on the same topic.

Today's Golden Oldie is from September 28, 1998. Usually I am frustrated by the various English spellings for this holiday . . . Succot, Sukkot, Sukkoth, etc. When I was a kid the Ashkenazi accented Sukkas was the accepted pronunciation. But a while ago, "when I was a kid" started to seem like the dark ages. That lead me to doing this cartoon. Of course ten years have now gone by since I considered my growing old in this 'toon from 1998. By the way, the idea of the modern supermarket, where customers take the stuff off the shelves themselves was apparently developed by American entrepreneur Clarence Saunders and his Piggly Wiggly stores. His first store opened in Memphis, Tennessee, in 1916. For more about the history of supermarkets click here.

They keep telling us that this economic meltdown could be a replay of the 1929 stock market crash, so it was only natural that the image of the farm couple in Grant Wood’s fantastic "American Gothic" came to mind. But every attempt to draw the painting was a gross and grotesque failure, The piece was almost too holy for me to parody with taste. I gave up, talked myself into believing that only the "real" image would work, and worked up a version of the cartoon with the real painting pasted in ...sort of like a captioned photograph. I showed it to a friend who said "Nice, but I'd like to see a Dry Bones version of the painting." So I gave it another try. But I only succeeded in freeing my mind when I saw a Disney version called "Homegrown". 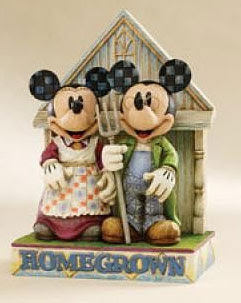 Hey if Disney could play with the image so could Dry Bones!

Happy Holiday To Us All!
For previous Sukkot cartoons and commentary click here.

I was really offended by Sarah Silverman's shocking scare tactic message that "if Obama doesn't get elected I'm going to blame the Jews". The idea of the Great Schlep is to send Jewish kids to Florida to talk (urge, frighten?) their old Jewish Grandparents into supporting Obama. To fight back, the Republican Jewish Coalition spoke to those Florida Jews in an accent they understand. Here's Jackie Mason, turn up your speakers and click on the play arrow:And if you want to see the original, "old Jews are rascists" Schlep video, click here.

No Cartoon Today ...It's Yom Kippur, the Day of Atonement!

Here's the story as reported by Caroline Glick::

"Outgoing Prime Minister Ehud Olmert has never been a shrinking violet. And on Monday, he made clear that he has absolutely no intention of leaving the public stage quietly.
In a Rosh Hashana interview with Yediot Aharonot, Olmert admitted for the first time that he is negotiating deals with Syria and the Fatah-led faction of the Palestinian Authority committing Israel to withdraw from the Golan Heights, from dozens of neighborhoods in Jerusalem and the Temple Mount, as well as from all or nearly all of Judea and Samaria". -more

* * *
The holy day of Yom Kippur begins this evening when we beg forgiveness for our sins and transgressions. We Israelis should do some extra grovelling for having allowed this man to remain in control of the Jewish State for so long after he proved himself to be a disaster.
* * *
"Tsom Kal !" (have an easy fast!)

Actually it seems to me that it is the whole world that is now "caught in the cross-hairs" We are all exposed!

Most of us who are upset at the hunting of moose for meat have no problem with the slaughterhouse industry that, behind closed doors, kills cows for our burgers and steaks. There's a name for that attitude. It's called hypocrisy. While thinking about that, I doodled a sketch of a moose and a cow having a chat. It turned into today's meat meets meat cartoon.

Today's Golden Oldie is from 1978. Thirty "New Years"s later and we still have no idea what surprises are in store for us. One thing has changed in these thirty years. Back then everybody in Israel smoked. Everybody. And so I regularly drew characters with cigarettes dangling from, and dancing on, their lips as they spoke. Now it turns out that big time Hollywood actors were paid to appear in films and in public smoking cigarettes! Who knew?!