Antisemitism infects society with beliefs that define Jews as demonic, powerful, and a threat to the world. The currently accepted and false belief is that the “Palestinians” are the native people of “Palestine” and that the Jewish State is an occupying colonial state. This single fabrication is the main driving force behind the current wave of global antisemitism.The remarkable success that antisemitism has now attained has been made possible by the new tactic of erasing 3,500 years of Israel’s history in the land prior to the establishment of the modern state in 1948.The history of the Children of Israel in the Land of Israel, which was once common knowledge, has been deleted from our collective memories the way that the giant Buddhist statues in Afghanistan were obliterated.

One way of keeping our history alive is through the Passover Haggadah. We've just published a hard cover edition of the Dry Bones Passover Haggadah. It's complete, kosher, Hebrew and English, and every one of its 104 pages is framed by full color Dry Bones cartoons. Supplies are limited! Don't miss out! Get yours from Amazon.com by clicking on www.store.drybones.com

The Gardens of Europe

The horrifying result of ignoring European "neighborhoods" in accordance with the politically correct insanity of "multiculturism."

While Supplies Last!
Get YOUR Dry Bones Passover Haggadah
store.drybones.com

Superman V Batman? The movie with Israeli actress Gal Gadot as the Amazon Wonder Woman? No! It’s Moses V Pharaoh! The Haggadah with online Amazon as the sole distributor. Superman was created in 1938 by two Jews, Jerry Siegel and Joe Shuster. To build a super hero they turned to Moses and Israel for inspiration. The secret truth about their creation is how very Jewish it is. Superman as a baby, like baby Moses, was saved from death by being lovingly placed in an ark by his mother and sent off to be found and raised by a foster mother. American Jews were routinely given a secret Jewish name and an “American” name. Siegel and Shuster gave their hero a secret Jewish name. They knew that many “Jewish” names ended in EL (Micha-el, Isra-el, Ezeki-el, Shmu-el, etc.) so the baby’s real name was Kal-El and his father was Jor-El. His American name was, of course, Clark Kent. Clark, like the Jews in Siegel and Shuster’s America, was the immigrant survivor of a lost, destroyed civilization. It would not be until ten years later, in 1948, that the incredible would happen. Siegel and Shuster’s “lost, destroyed civilization” would be reborn when the State of Israel would rise again in the ancient land of Israel. A great deal can be written about the Jewishness of Superman, the first super hero, but to read “the original” you’ve got to read and enjoy the Passover Haggadah. Get yours, while supplies last, at http://www.Store.Drybones.com

the Blindness of EU leaders

The horrifying truth about the ISIS war against Europe.

Yup. Now is the time, while supplies last, to order a Dry Bones Passover Haggadah by clicking HERE

The Secret Joke of Purim.

Watching our "Friends" Watching Us!

Yup. In every generation they rise up to destroy us! And the world watches! Time to order a Dry Bones Passover Haggadah by clicking HERE

Yup. In every generation they rise up to destroy us! So munch on some Oznai Haman and order a Dry Bones Passover Haggadah by clicking HERE

Traditionally we attend a reading in the synagogue. (From a long scroll, sort of like this long Dry Bones Purim Web page)

Obviously the saving of one Jewish community in ancient Persia is not what makes the joyous Purim holiday so significant. And the characters of "Queen Esther" and "Mordechai the Jew" are NOT what makes the holiday tick.The tale of Purim is important because it provides us with a view of the archetypical villian, Haman.

WICKED
HAMANAnd recognizing the sly Haman who wants to destroy us is important, because there seems to be a Haman in every generation.And so on Purim we celebrate our escape from a long line of "Hamans" that stretches down through history and around the world!

The triangular pastries are traditionally filled with poppy seeds. Yup, the seeds of the opium poppy. But the only buzz you'll get from "Hamantaschen" will be the yummy taste and the joy of Jewish continuity and survival. Some people prefer other kinds of pastry fillings.

On Purim, we dress up our kids in costumes and send them to knock on the doors of our friends and neighbors.But unlike the Halloween tradition, costumed Purim kids are not on "trick or treat" missions.

They bring a plate of food treats to give to the people whose doors they knock on. This Purim custom is a way of letting our fellows know that we are celebrating the survival and continuity of the Jewish people and a way of expressing our love of our neighbors.
(And what better treat to deliver on this occassion than a plate of "Haman's Ears"?)

HAPPY PURIM TO US ALL!

According to The Tower:

"A day after Iran announced that it tested a number of ballistic missiles across the country, in defiance of a United Nations Security Council ban, the Islamic Republic launched two more missiles marked with the threat “Israel must be wiped off the Earth” in Hebrew, CNN reported on Wednesday.The missiles, which are capable of reaching Israel from Iran, were launched on the second day of countrywide defense exercises.According to CNN, the phrase they were marked with is attributed to Iran’s first Supreme Leader, Ayatollah Ruhollah Khomeini." -More

The BDS movement was born in Hitler's Germany in 1933. On the day Hitler came to power in 1933 he ordered a nationwide campaign of boycotting Jewish businesses, shops, and enterprises while the world stood by. It was the first step towards the "Final Solution";the Nazi plan to exterminate the Jewish people, . 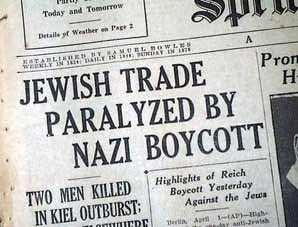 .
Today, the BDS movement to strangle the Jewish State has already spawned violent campus storm trooper-like groups that carry out physical attacks on Jews.According to The Coordination Forum For Countering Antisemitism:

The so-called "BDS" movement is nothing less than a poorly-disguised campaign of bigotry and aggression against Jews by antisemites and jihadists.While its roots go back far earlier, ever since the 1930s the first manifestation of Nazi-like antisemitism has been to organize economic boycotts against Jews. On the day Hitler came to power in 1933 he ordered a nationwide campaign of BDS or "boycotts, divestment and sanctions" against Germany's Jews. It was of course only the opening round in economic warfare and aggression directed against Jews. The Germans claimed that they were actually the victims of the Jews, who were occupying German territory. Sound familiar?The Arab countries quickly took note of the lessons from Germany. As soon as Israel's existence and independence were proclaimed, the Islamofascist world announced a total BDS campaign, including a trade embargo, against Israel. This boycott was generally also implemented against non-Israeli Jews, removing any doubt as to the real agenda of the boycotters. That boycott is still by and large in effect, although here and there one can see cracks in it. Syrian Arabs injured by the Assad junta feel no hesitation to flee to the Israeli border and ask for medical assistance, which they get for free, and Arabs from the Gulf states quietly fly to Israel to get medical treatments.The latest manifestation of Boycott-the-Jews antisemitism is in the campus "BDS" movement. Like the previous boycotts, the newer "BDS" is nothing more than a here. The resemblance to Judith Butler and her recent appearance at the Brooklyn College Hatefest is, in the immortal words of Yoggi Berra, too coincidental to be a coincidence.-more

How this ends is anybody's guess. But watching is really fascinating.

Peek Inside the Haggadah

Peek Inside the Dry Bones Passover Haggadah
Each of the 104 full color pages is designed according to this layout:

Here are a few of the pages

Get your Haggadah here: http://www.drybonesacademy.com/storeIf you're a real Dry Bones fan, this Haggadah is a must-have at your Seder table.

Even though it's not yet Purim, it IS time to order the Haggadah now.
http://www.drybonesacademy.com/storeThere are three reasons.
First, Amazon is currently offering them at a special discount.
Second, you've got to allow time for shipping.
And third, there really is a limited supply and once you see yours, you'll probably want to order a few more as gifts.YES! the Classic Dry Bones Passover Haggadah (Hard Cover edition) is now in stock at Amazon.
It is complete and accurate, It's in English and Hebrew, and it is a fully Kosher edition with every one of its 104 full color pages framed by Dry Bones cartoon commentary.
. . . and it makes a great gift!Supplies are limited so don't wait 'til we sell out!
Get yours here: http://www.drybonesacademy.com/storeIf you're a real Dry Bones fan, this Haggadah is a must-have at your Seder table.

Antisemitism at City University of NY