It is both sad and shocking that 70 years after Auschwitz, a cartoon like today's could or would be relevant.

Auschwitz and the Jewish State

The Auschwitz Concentration Death Camp was liberated on January 27, 1945. The State of Israel declared independence on May 14, 1948.

according to the AP:

"At least two rockets launched from Syria struck the Israeli-controlled Golan Heights on Tuesday and Israel responded with artillery fire, the Israeli military said. The fire comes after an airstrike last week in Syria attributed to Israel that killed six members of the Lebanese militant group Hezbollah and an Iranian general. Israel has braced for a response to that strike, beefing up its air defenses and increasing surveillance along its northern frontier. Israeli military spokesman Lt. Col. Peter Lerner said the fire "appeared to be intentional." He declined to comment on whether the fire may have been connected to the strike last week. A message on Lerner's Twitter account said Israel "responded with artillery towards the positions that launched the attack."-more

* * *
Due to popular demand, we've re-opened our indiegogo site. We reached (and went beyond) our fund-raising goal but so many people have asked if they can still contribute and receive our "perks" (Dry Bones Haggadahs, dvd's, etc.) that we've been forced to comply. To check it out go to http://igg.me/at/drybones

The U.S. President's apparent insecurity is an embarrassment to America. The attempt to portray a congressional invitation to Israel's Prime Minister as a political ploy while the U.S. tries to stop the potential development of Iranian Nukes is disgusting.
* * *
Due to popular demand, we've re-opened our indiegogo site. We reached (and went beyond) our fund-raising goal but so many people have asked if they can still contribute and receive our "perks" (Dry Bones Haggadahs, dvd's, etc.) that we've been forced to comply. To check it out go to http://igg.me/at/drybones

Actually the President will not be able to attend the funeral itself because non-Muslims are barred. Does the word "apartheid" ring a bell?

The folks on our border were bad enough. Now they've got visitors!

So what, one wonders, are an Iranian general and Iranian troops doing on the Golan Heights, on Israel's borders? Hmmmmm?
The news, according to Yahoo News:

Iran general killed with Hezbollah fighters in Israel raid
Beirut (AFP) - "An Israeli strike on Syria killed an Iranian general, Tehran confirmed Monday, as thousands of supporters of Lebanon's Hezbollah gathered to bury one of six fighters killed in the same raid.
The attack on Sunday near Quneitra on the Syrian-controlled side of the Golan Heights enraged Hezbollah's supporters, but analysts said the group would avoid a major escalation with Israel.
Iran's elite Revolutionary Guards confirmed the death of one of their generals in a statement on their website.
"General Mohammad Ali Allahdadi and a number of fighters and Islamic Resistance (Hezbollah) forces were attacked by the Zionist regime's helicopters," it said.
"This brave general and some members of Hezbollah were martyred."
A source close to Hezbollah said six Iranians had been killed in the attack. Hezbollah told AFP that it was not the source of that toll.
Among Hezbollah's dead was Jihad Mughniyeh, the son of an assassinated commander from the group, and Mohammed Issa, a commander responsible for Hezbollah's operations in Syria and Iraq."-more

Big energy companies aren't the only ones losing out on the dramatic fall in oil prices. Banks are in the hot seat, too.
"Hundreds of banks were forced to shut down in Texas when the state fell into a recession in 1986 during a steep decline in oil prices. That 1980s meltdown mirrors the current drop in prices that carried oil below $45 a barrel this week.
Cheap credit helped fuel the U.S. shale boom, allowing countless energy companies to find oil in new places. Banks also capitalized on economic booms in oil-rich regions like Texas and North Dakota. It would only make sense for these same banks to feel some pain from oil's downward spiral. Drilling projects that made sense at $100 may now be losing money, creating headaches for the lenders that financed the expansions. Some highly-leveraged shale companies may even go belly up due to the plunge in oil prices."-more

But maybe the oil prices could be part of the new U.S. - Russian Cold War?
According to this opinion piece in the Washington Post:

Falling oil prices hit Venezuela, Iran and Russia hard
"As oil prices continued to plunge last week, it was instructive to watch the disparate reactions of three governments whose whopping losses are likely to produce some of the biggest international stories of 2015.
There was the panicked scrambling of Venezuelan President Nicolás Maduro, who skipped his own state of the union speech for a desperate world tour in search of loans or promises of $100 oil. He got neither, even as rumors flew back home about whether he would be allowed to stay in office on his return.
There was the cool response of Vladi­mir Putin, whose ministers announced drastic cuts in government spending — except for defense. Russia’s proxy forces in eastern Ukraine meanwhile launched a new offensive."-more

Time for Europe's Jews to come home to Israel. Time for Europeans to understand that they are being attacked by an Islamist civilization that is bent on destroying them.

According to the Guardian:

Turkey confirms ‘escape’ of French terror attacker’s partner to Syria
"TURKEY on Monday confirmed that Hayat Boumeddiene, the wanted partner of one of the gunmen behind the terror attacks in France, travelled through Turkey last week on her way to Syria. "She entered Turkey on January 2 from Madrid. There are images of her at the airport," Turkish Foreign Minister Mevlut Cavusoglu was quoted as saying by state-run news agency Anatolia. Cavusoglu said the 26-year-old, who married gunman Amedy Coulibaly in an Islamic ceremony, stayed at a hotel in Kadikoy on the Asian side of Istanbul and was accompanied by another person. She then crossed into Syria on January 8, according to her phone records, Cavusoglu said, without making clear if she travelled to Syria on her own. A Turkish security source on Saturday had also told AFP that Boumeddiene had entered Turkey on January 2 and was believed to have moved on to the southeastern Turkish city of Sanliurfa and then to Syria. But Turkey did not arrest her because of a lack of timely intelligence from France, the source said. Cavusoglu's comments confirm that Boumeddiene was already outside France when the killing spree began, contrary to earlier speculation that she had been involved in the Paris killings in which 17 people died. Boumeddiene is suspected of having had a role in her partner attacks which culminated in a bloody hostage-taking in a kosher supermarket on Friday after he had shot dead a policewoman close to a synagogue the day before."-more

* * *
Our campaign is about to close
If you're gonna' join, now's the time.
http://igg.me/at/drybones

Europe on the March 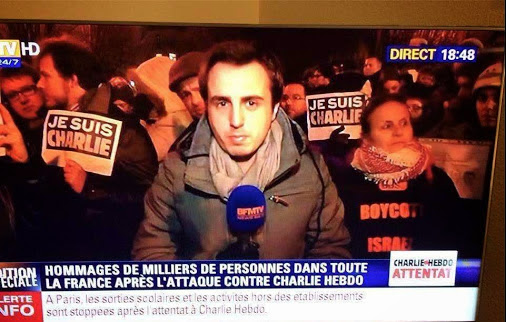 Check out the boycott Israel shirt in the photo! Unbelievable!
Our campaign is about to close
If you're gonna' join, now's the time.
http://igg.me/at/drybones

Time to Ask The Question

Our campaign is about to close
If you're gonna' join, now's the time.
http://igg.me/at/drybones

Our campaign ends in just a few days
If you're gonna' join, now's the time.
http://igg.me/at/drybones

Our campaign ends in 5 days
If you're gonna' join, now's the time.
http://igg.me/at/drybones

According to the BBC:

"Gunmen have shot dead 12 people at the Paris office of French satirical magazine Charlie Hebdo in an apparent militant Islamist attack. Four of the magazine's well-known cartoonists, including its editor, were among those killed, as well as two police officers. A major police operation is under way to find three gunmen who fled by car. President Francois Hollande said there was no doubt it had been a terrorist attack "of exceptional barbarity". It is believed to be the deadliest attack in France since 1961, when right-wingers who wanted to keep Algeria French bombed a train, killing 28 people. The masked attackers opened fire with assault rifles in the office and exchanged shots with police in the street outside before escaping by car. They later abandoned the car in Rue de Meaux, northern Paris, where they hijacked a second car. Death threats Witnesses said they heard the gunmen shouting "We have avenged the Prophet Muhammad" and "God is Great" in Arabic ("Allahu Akbar"). The number of attackers was initially reported to be two, but French Interior Minister Bernard Cazeneuve later said security services were hunting three "criminals". He said that Paris had been placed on the highest alert."

Thanks, But No Thanks.

Don't wait, don't miss out on joining the Dry Bones team!!!
There's just a few days left in the campaign! For details please click on http://igg.me/at/drybones

According to Reuters News Agency:

JERUSALEM (Reuters) - "For someone nearing 80, President Mahmoud Abbas still knows how to shake things up. But his decision last week to join the International Criminal Court is a high-risk move that may set back the ultimate goal: an independent Palestinian state.
Frustrated by the lack of progress in negotiations with Israel - the last, fruitless talks broke down in April - and the failure of his New Year's Eve statehood bid at the United Nations, Abbas followed through on a long-promised threat to join the ICC, filing the relevant documents on Jan. 2.
The decision, to be formalized in the next 2-3 months, opens the way for war crimes charges to be brought against Israel, whether relating to last summer's conflict in Gaza or the impact of Israel's 47-year-long occupation of Palestinian territory.
Equally, it opens the Palestinians up to war crimes charges, and Israeli officials have said they plan to make such moves via courts in the United States or elsewhere.
But the biggest immediate hurdle for Abbas is getting the ICC, set up in The Hague 12 years ago, to take on any case it brings. Joining the court is one thing, but convincing the chief prosecutor that you have a winnable set of evidence is another."-more

Meanwhile, you can make your judgement here and now!!!
It's simple, join the Dry Bones Team. For details please click on http://igg.me/at/drybones

"Academic freedom" (in America at least) used to mean that unpopular opinions and speakers were essential to education. The goal was to encourage students to learn to think for themselves. These days academic freedom has largely been replaced by doctrinaire-spouting educators. What we now have is a regrettable academic loss of freedom. In today's cartoon, our new character, "the Professor", demonstrates.
* * *
To fight these poisoners of our students, click on http://igg.me/at/drybones
We Need Your support.

Hope this made you laugh. But don't you dare to stop following the news!!!
Fight back!!! For details please click on http://igg.me/at/drybones
We Need Your support.