Today's Golden Oldie is from 2004. We are witnessing in Syria today a a war between the Alawites and the Sunnis. But the press continues to say that Assad is killing "his own people". Political correctness keeps the West ignorant of reality. And the Western Media is a major factor in this deception.

We don't know what's really going on because we are forced to rely on the media. Maybe the talks with Iran are just a meaningless smoke-screen? What if the war has already started? What if their attempts to build a Doomsday Device are being torpedoed and being taken out by our Viral Internet Weaponry?!This is just in from an Indian News site:

Sophisticated spyware virus targets Iran’s N-prog?Jerusalem: An unprecedented "cyber espionage worm" considered the most sophisticated spyware virus yet unleashed, attributed to a "state player", has hit Iran and other Middle Eastern countries with the possible goal of foiling Tehran's nuclear ambitions.Security experts discovered the new data-stealing virus dubbed Flame which they say has lurked inside thousands of computers across the Middle East for as long as five years as part of a sophisticated cyber warfare campaign.Russia-based Internet security company Kaspersky Lab that uncovered the virus 'Flame' said it is designed to collect and delete sensitive information.Kaspersky, one of the world's biggest producers of anti-virus softwares, said the bug had infected computers in Iran, the West Bank, Sudan, Syria, Lebanon, Saudi Arabia and Egypt." -more

Today's Golden Oldie from 1999 makes a prediction about 2012.So how'd I do? The little girl is now old enough to be in college. But as to the teaching of history, NATO's destruction of Yugoslavia is forgotten. World War III is in full bloom. It is an Islamofascist war to destroy all other social, religious, or political systems, but in this World War, history itself is under attack.It's the reason that I've launched the Dry Bones Project to retell and popularize Israel's piece of history ...to protect it from the History Deniers ...to reclaim a history that stretches back 3,500 years before the founding of our modern state in 1948.

A Deal with Iran

according to this piece in Israel HaYom:

"Don’t underestimate Obama’s willingness to undercut current allies (including Israel and Saudi Arabia) in the process of cutting a deal with the Iranians. There is much more at stake here than the mere stymieing of Israeli attack plans.The interim agreement with Iran that the P5+1 powers seem set to conclude with Iran in the Baghdad talks this week – involving the suspension of Iran’s 20 percent uranium enrichment – is dangerous on four levels.Firstly, the deliberations over the exact details of this agreement are likely to drag out for months, into the fall, giving the Iranians time to surreptitiously enrich even more uranium and to continue their explosives testing work. Of course, this suits Obama’s election timetable just fine because Israel dares not strike Iran while supposedly “positive and successful” negotiations are under way."

Today's Golden Oldie is from May 1997.Fifteen years ago. Bibi was Prime Minister. The country was concerned about domestic violence. The terrorists had been released from prison, and the world wanted to give them a state of their own.

For Democracy to work, there needs to be a free and independent media. A way for the public to be informed about what is going on. The biased fawning by main stream American media over the failed Obama Presidency is sad to witness, and a sign of America's decline.

It's not often that Israel's government surprises its citizenry. So now that we are all surprised, we're holding our breath and waiting to see what happens next!! Like the unseen populace in today's King Solomon cartoon.

Today's Golden Oldie is from May 1998, when we were celebrating Israel's 50th birthday.
* * * * * * * * * *
In another few years we'll be remembering 2012. And what better way to look back than to toast the year with a genuine, collectable Dry Bones 2012 commemorative mug?They cost $19.95 each. They are large (a hefty, 15 oz.) ceramic mugs with big, comfortable easy-grip handles. They are dishwasher and microwave safe. If you don't get one now, you'll be kicking yourself next year. Click on the photo below for more info, to take a peek at the other side (and perhaps to buy one).

When I heard the news about the on-campus anti Israel demonstration/ceremonies at Tel Aviv University, I immediately drew two cartoons.
Today's is the second. I ran the first one on Monday.

Today's Golden Oldie is ten years old. It's from May 2002. It features Yasser Arafat, the clever Egyptian who sold the world the idea that there was a "Palestinian" people, and that they (and not the Jews) were the ancient indigenous natives of the land of Israel ...and that he was their leader!Yasser is no longer among the living, but his lies live on.
* * *
After having read what I wrote above, It occurs to me that some of you will think I've gone too far and exaggerated his deceptions by describing Arafat as an Egyptian. So read this:

"Yassir Arafat, whose real name is Abdel-Rahman Abdel-Raouf Arafat al-Qudwa al-Husseini, was born in August 1929 in Cairo, son of an Egyptian textile merchant. He was sent to Jerusalem as a small child after his mother died, then returned to Egypt via Gaza.Throughout his career, Arafat’s Egyptian background was a political impediment and source of personal embarrassment. One biographer notes that upon first meeting him in 1967, ‘West Bankers did not like his Egyptian accent and ways and found them alien,’ and to the very end Arafat employed an aide to translate his Egyptian dialect into Palestinian Arabic for conversing with his West Bank and Gaza subjects." -more

Education minister: TAU Nakba event 'outrageous'
Sa'ar calls on Tel Aviv University president to reconsider his decision to allow on-campus ceremony marking Nakba Day."Education Minister Gideon Sa’ar asked Tel Aviv University President Professor Joseph Klaftner over the weekend to reconsider his decision to allow students to organize an “outrageous” on-campus ceremony to commemorate Nakba Day.The Nakba, meaning “catastrophe” in Arabic, is an annual commemoration when Arabs mourn the creation of the State of Israel in 1948. The Palestinian narrative recounts how hundreds of thousands of Arabs were either forced or felt compelled to leave behind their homes, with many fleeing to Israel’s neighboring countries where they remain until this day.TAU announced this week that it would allow students to organize a Nakba Day commemoration under certain provisions, including hiring six school security guards to monitor the day’s events. The school administration also prohibited organizers from using a PA system and hanging flags and banners.Speaking with the university president, Sa’ar said he thought the university’s decision to allow the ceremony was “false and outrageous,” Army Radio reported.Students organizing the event said the commemoration would include a moment of silence to emphasize the importance of the Palestinian day of mourning, which falls on the day after the Gregorian date of Israel’s independence.The event at TAU’s Antine Square is scheduled for May 14"-more

Posting a cartoon every weekday leaves no room for me to simply share news, ideas, and other stuff with you. So welcome to 'Sunday Mail: Letters from Dry Bones', an irregular, once-a-weekish Dry Bones feature.

Item One: Sudden Unity Government in Israel:
How to explain the sudden announcement of a unity government in Israel? Charles Krauthammer suggests that we are in for a rerun of Israel's historic year of 1967. It was Israel's 19th year and the Jewish State was isolated and threatened and with extinction. Israel's surprise was launched in June, but preparations were made in May. Read his fascinating analysis of the parallels between May 1967 and May 2012 by clicking on Krauthammer

Item Two: Israel's 64th:
May 2012 ushered in Israel's 64th year. We don't know if 2012 will be as memorable as 1967, but you'll be able to remember this year with this collectible Dry Bones commemorative mug! They cost $19.95 each. They are large (a hefty, 15 oz.) ceramic mugs with big, comfortable easy-grip handles. They are dishwasher and microwave safe. If you don't get one now, you'll be kicking yourself next year. Click on the photo below for more info, to take a peek at the other side (and perhaps to buy one). 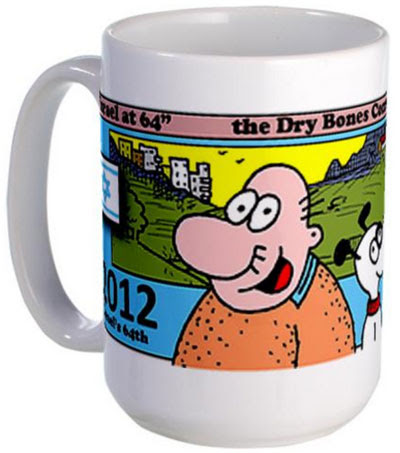 $19.95 gets you this Dry Bones Commemorative Mug

Today's Golden Oldie is from back in 1997. Fifteen years ago this month. In America there is an annual cycle of Jewish communal life. Then as now, organized American Jewry was slipping towards summer while thinking of the the fund-raising season that would follow.

Introducing "The Elderly Couple". He's wearing a shoe-polish black hairpiece and she's long-ago given up on "coloring" her hair.I did this cartoon after two days of searching for my wallet. I felt like a senile old geezer who'd lost his memory. So I drew this cartoon.Good News! It turns out that my wallet was stolen! I didn't "forget" where I'd put it! So that's the good news. It's also the bad news as I now have to start cancelling plastic and replacing my press card, national identity card, etc.

Today's Golden Oldie is from the Lag Ba'Omer holiday back in 1999. I'm running it today because tonight we'll be celebrating the bon-fire holiday.Back then we were having an election and Mr. Shuldig had saved all the campaign literature for burning. This year we're also having an election but it hasn't quite started and it's too early to have a stock of campaign leaflets to burn yet.

We're all being infected by election fever!! Meanwhile, the West's suicidal lack of attention to the Islamist Iranian Atomic threat is so sick that I decided to draw a doctor to address it!

In today's cartoon I used King Solomon to ask a question that I can't answer. Neither could he. Or his advisor. I think I got this cartoon in under the wire (i.e. just in time). Israel is now moving into election mode so any suggestion that we're doing something right will soon sound like a partisan campaign claim.

Today's Golden Oldie is from back in 1984. In America, elections are boringly on schedule. Here in Israel, picking the right date is part of the political process, and as I write this, we're at it again!According to Ynet News:

Likud seeks September 4 elections
Coalition chair submits official motion for Knesset's dissolution; Opposition prefers September 16"Coalition Chairman MK Zeev Elkin (Likud) filed an official motion for the dissolution of the 18th Knesset on Wednesday.
Likud officials told Ynet that the part will now push for elections on Tuesday, September 4.
Opposition Chairman Shaul Mofaz (Kadima) however, is pushing for Sunday, September 16 and election day.
Accordingly, the Knesset is likely to end its term next week.
Earlier, Knesset Speaker Reuven Rivlin said that bills proposing to dissolve the Knesset will be put to a vote on Monday." -more

Today's cartoon is about a traditional weakness in the American Presidential election system. I don't have any suggestions about how to fix it, but I felt the need to comment on it.

Today's Golden Oldie is from twenty years ago in this merry month of May. Somewhere at this very moment in America, the fall campaigns are being planned.