Shana Tova, a Happy Jewish New Year to us all!!
Tonight is Erev Rosh HaShana, the start of the High Holidays.

People often ask me "How do you get your ideas?" Well I thought of this one while writing a previous blog commentary. Don't believe me?
Here.
Look. Previous commentary

Today's Golden Oldie is from 1975.Back then we were about to plunge into the "High Holidays" season of holiday meals. As it was then, so it is now. This coming Monday night will be Erev Rosh HaShana. A time that could be stressful for dieters.

Go on have a nice piece of delicious Honey Cake. Just one bite won't hurt and hey, it is a holiday isn't it?

Western Democracies rely on a well-informed public. So what can be done when respected journals like the New York Times and the Washington Post display anti-Israel bias and distortions in their reporting ?The answer is CAMERA.
(The Committee for Accuracy in Middle East Reporting in America).And while you're at it, take a look at their blog. It's called Snapshots

Today's Golden Oldie is a Rosh HaShana card to the public that I drew back in 1976.I decided to re-run it, the Muslim holiday of Eid El Fitr is being celebrated next week, as is the Jewish New Year Holiday of Rosh HaShanaBack in 1976, to include Christian readers, I took out a pencil and paper and calculated the "shopping days till Christmas". Today I just Googled for it ...and I COULDN'T find the answer. There's no HowManyShoppingDaysTillChristmas.com! Outrageous! And these days I wouldn't think of doing the calculation on paper!Google has made me lazy.

This is one of those times that I felt like staring into the camera and just saying the simple truth ... so I did this close-up of a wide-eyed Mr. Shuldig. I broke my rule about having a smile in the last panel. Here M. Shuldig is disturbed, rather than amused, as he reaches a conclusion about this "new" American-style Israeli political party.

I have made obvious (at-the-time) decisions that, in years to come I've looked back at and said to myself in horror "what was I thinking?!" I wonder if one day Obama will be saying that to himself. Obama's thinking at the convention was, of course, totally conventional. He made a wise, predictable, obvious, and conventional choice. We are now watching how his decision plays out in this increasingly fascinating Presidential campaign of 2008.Your predictions?

Today's Golden Oldie is from 1976.Back then I wondered at the system which kept a government in power after it had fallen from power. It is now thirty two years since I drew this cartoon. I still feel the same way. In fact the LSF (long suffering wife) suggested that I just redraw the cartoon and send it out to syndicate newspapers as a "new" cartoon.
* * *
Now we'll have Tzipi Livni instead of Olmert? The befuddled Kadima gov't has crashed, burned, tumbled down an embankment and it keeps on plowing ahead, with us as the frightened passengers and them putting in a new driver at the wheel... hmmm... Now that could be a cartoon!

I called this posting "America America" but what's happening in the U.S. economy is being watched all over the world. And we're all wringing our hands, worrying and worrying about where this apparent financial breakdown is going to take us all.
* * *
I figure that the Administration is going to keep propping up financial institutions until after Election Day on November 4.So what do you think?

Today's Golden Oldie is from August 1983.Israel was having a serious bank crisis. We searched the newspapers for answers about what our government was going to do. Worrying times. Like now in America and maybe the whole world.

Here in Israel we are being treated to media coverage of a shooting war that is going on between organized crime families ...and by the attempt by the Kadima government to avoid elections and to continue its control of the Knesset.Today's cartoon sums up my feelingsWhat's yours?

The Dutch movie "Fitna" shows the Western world how its latest mortal enemy, extremist Islam, uses the Koran to preach and carry out terror attacks. Result? The film has been banned everywhere in the Western world! Including the Internet!!! Just try to find it online! It's a total surrender to terror. Appeasement based on fear!I finally found only one site willing to show the film. To see the full version of the banned documentary click on Fitna Movie at Arutz Sheva.

Yesterday's cartoon was an angry response to the missionary organization which calls itself "Jews for Jesus" (even though its members have become Christians).
* * *
Today's Golden Oldie is from sometime in 1973. Thirty-five years ago. Sorry, I couldn't find the exact date. 1973 was the year that I first began doing the Dry Bones cartoons.
* * *
Looks like I was just as angry at these missionaries back then as I am now.

According to the ADL:

"The executive director of Jews for Jesus, David Brickner, took over leadership of the group in 1996 and he regularly appears at churches around the United States to promote the group's work. He gained widespread attention for a presentation he gave in August 2008 at the Wasilla Baptist Church in Wasilla, Alaska, where 2008 Republican vice-presidential nominee Sarah Palin is a member.During his talk, Brickner reportedly said that recent terrorist attacks in Israel were God's "judgment" against Israelis for failing to believe in Jesus as the Messiah." -more

Today's Golden Oldie is from September 1988.
Exactly twenty years ago this month.Back then, we and the Egyptians were arguing over the borderline between our two countries. On the Red Sea, the border question was whether a small area in Sinai called Taba would be included in Egypt's territory, or would the border be drawn to include it in Israel. In the end we went for international arbitration (and lost).
* * *
There was no question on the Mediterranean Sea border. We insisted on not giving control of Gaza back to the Egyptians, and they let us have our way. As you can see from the cartoon, I saw nothing but trouble ahead if we "kept" Gaza. But, hey, who listens to cartoonists?!

I couldn't resist using these new characters again. If you missed the previous outing of these two tough old women's libbers ...click on Clinton Palin.
* * *
The term "glass ceiling" was first used in the late seventies in America to describe how, although there was no visible barrier to the advancement of women in executive positions, in reality females hit a level above which they seemed unable to rise... a "glass ceiling".
* * *
Your thoughts? ...about the new characters, about women in politics, about glass ceilings, about the 2008 Presidential elections, about Hillary Clinton and Sarah Palin?

When I did this cartoon I thought of showing Olmert as a "Frankenstein" ...that's why he's got the bolts in his neck and the flat-top head shape. But I quickly realized that I needed to identify our out-of-control blockhead as the Golem. The Golem was the model for Frankenstein's monster, A soulless being created by a scientist (or Rabbi). For those of you not familiar with the "the Golem" you can get the full rundown at the Jewish Virtual Library :

"The most well-known story of the golem is connected to Rabbi Judah Loew ben Bezalel, the Maharal of Prague (1513-1609). It was said that he created a golem out of clay to protect the Jewish community from Blood Libel and to help out doing physical labor, since golems are very strong. Another version says it was close to Easter, in the spring of 1580 and a Jew-hating priest was trying to incite the Christians against the Jews. So the golem protected the community during the Easter season. Both versions recall the golem running amok and threatening innocent lives, so Rabbi Loew removed the Divine Name, rendering the golem lifeless. A separate account has the golem going mad and running away" -more

* * * Unfortunately our Golem shows no sign of "running away"

Today's Golden Oldie is from September 28, 1998.
Ten years ago this month.
Back then the 21st Century was on the horizon ...and I was speculating about how people looking back would think of the Nineties as the old days.So here we are, doing just that!
And if I was one of the "old guys" back then, what am I now?!?Yikes!

I find the idea that African Americans should vote for Obama because he is black to be racist. Here in Israel folks say that if America does not elect Obama it will be because white Americans are racist. I doodled an image of these two old-time feminist radicals while thinking of the whole Hillary - Sarah Palin thing. I see them as a couple of feisty activists now living in a retirement home. I could let them develop their conspiracy in a series of cartoons.What do you think?

Today's Golden Oldie is from September 27, 1993. Fifteen years ago this month. Bill Clinton is shown talking to Yitzhak Rabin a few days after the historic handshake on the White House lawn. 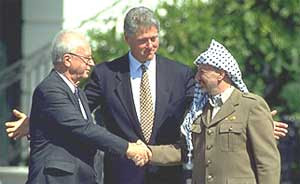 The "New Age of Mutual Trust" has still not resulted in the release of Jonathan Pollard, although Israel has dutifully (and insanely) gone on to release convicted murderers from our prisons in an effort to build "mutual trust".
* * *
The latest obscenity is the Olmert/Barak government's apparent plan to release convicted murderer Marwan Barghouti while the continuation of Jonathan Pollard's cruel and outrageous imprisonment is a growing stain on the reputations of America,Israel, and the Clinton "legacy".

The Israeli Mafia??!Well, we've now made it to international Mafia fan sites!! There's MAFIA TODAY billed as "Your Source for Mafia related news from around the World". It's got "Mafia Family Charts", a "Mafia Movie Database" and the latest news.And here's their latest update at the time of this writing:

Mob boss crony denies singing to American authorities
"An Israeli believed to be one of the key figures in the Abergil crime organization yesterday denied having either joined the FBI’s witness protection program or of testifying against an alleged Israeli kingpin.Yoram Elal, who has been in Brazil for the past two years, told his brother on the phone from Brazil yesterday, “No witness program, no way, I have nothing to testify about.” -more