A Dry Bones cartoon from 1983, 23 years ago!I chose to rerun this particular "Golden Oldie" because now, like then, I'm shivering, wheezing, and blowing my way through boxes of tissues. Now, like then, I haven't been following the news as closely, and now, like then, there's a major labor dispute going on in Israel. A general strike was called, held for one day, and a court-ordered "back to work decree" forced everyone back to their daily routines today.
Well, not quite everyone.
I'm still in bed!

We (Israel) did not defeat the Iranian surrogates (Hizbullah) in Lebanon, nor have we stopped the rockets being launched at us by the Iranian supported forces in Gaza (Hamas). Meanwhile, in Iraq, the Americans and the Brits are now making noises about retreating. "Iraq and Syria restore relations as region braces for U.S. pullback" is a worrisome New York Times headline. -more

A Dry Bones cartoon from 30 years ago!Back then I used the King Solomon and his adviser characters more than I do today. This 'toon from 1976 features the adviser speaking to an off-screen King Solomon. I chose to reprint this "Golden Oldie" today because the sniffles I had when I got off the plane that returned me to Israel on Friday have now morphed into a full, deep, hacking, rattling chest cold.

So I was out of the country (Israel) for a week and just got back. So it looks like I've returned to another re-run of our attempt to reach some kind of "cease fire" with the folks who have been trying to slaughter us, wipe our country off the map, and drive us into the sea since day one.Yup, it's deja vu all over again!
In the next step we'll probably demonstrate good faith by releasing terrorists from our jails.

So if you read this on Friday the 24th I'm actually either at the airport or on my way back to Israel... or taking my shoes off for Euro security.So have I invented the cartoon reality show?
Hmmmmm...I guess it's not reality these days unless you can vote someone off the show... or out of the cartoon.

A Dry Bones cartoon from 22 Thanksgivings ago!

27 years ago the doors slammed closed on the last of the ancient community of Jews in Persia. The diehards who had refused to flee when they had "the chance" were now trapped in the Islamic Republic.

I thought that the Jihadis were super-religious?!
Is image-making forbidden (harram)? What about TV?
Ask the Imam (Tv)So how will these picture-makers who claim to be religious Muslims be punished? Check this out. 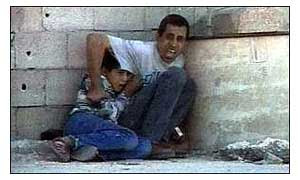 Do the Palestinians fabricate photographs and news footage? You bet they do! It's part of their propaganda war against us. Look at this photograph of the frightened Palestinian boy that has become an icon for the anti-Israel movement. Could this news footage image of 12 year-old Mohammed Al Durah and his dad(reproduced everywhere) be a Pallywood fake? I don't know. Second Draft presents the evidence and examines the possibilities.For me, a more important question is "Will the Al Durah image continue to be used for decades as proof of an Israeli atrocity?" And the answer to that is a firm YES! How do I know?. Consider the following news magazine photographic "spread" from 1937... the dramatic photo covers a page and a half. The image is of a bombed-out train station in Nanking, China. On the tracks is a crying Chinese baby, left there to die by the Japanese invaders. 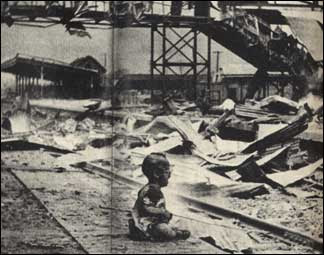 The following photo shows how the baby was set, as a prop, to be used in the heart-rending anti-Japanese propaganda piece. The photograph was a fake. 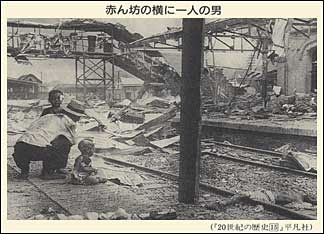 The following is the cover of Princeton University's 1997 commemoration of the 1937 Japanese atrocities at Nanking. The only image used, other than Princeton's Official Seal, is the Fake baby photo

Are we living in the age of the "Decline and Fall of Western Democracy"?
Did it start back then, at the time of this cartoon?More than twentyseven years ago?Thoughts please?

It seems like each day we wake to another blood-curdling story of torture, slaughter, kidnapping, genocidal hatred and Islamic fatricide coming out of Baghdad. The Thief of Baghdad has become the grief of Baghdad.But the Mideast (and Baghdad especially) was once multicultural, with various communities and ethnic groups living side by side and interacting with each other. We can see that lost world in the incredible, mind-blowing collection of interlocking stories that are revealed in a stream of narrative that feels like some fantastic psychedelic rant. And like the news out of today's Baghdad, there's a new and more unbelievable story each morning.

"The Arabian Nights can be viewed as a valuable source of Middle Eastern social history, being composed of the most extensive and intimate recordings of the medieval Islamic period. Generations of Arabic readers have appreciated the versatile and imaginative use of Arabic and the mixture of the classical and colloquial language in many of the stories, a style which helped diversify the characters from the narrative." -more

American Thanksgiving isn't 'til the end of next week, but I got to thinking. You can learn a lot about a culture by examining its myths, and in these post-U.S. election days I just thought about the "meaning" of Thanksgiving for our day.It's a classic! There are "people of color" and white Europeans, Liberals and undocumented illegal immigrants(the Pilgrims)... It's the basic "Why can't we all just be friends" concept.Fresh with this new understanding, I rushed to do this (premature) Thanksgiving cartoon.I hope that political correctness has not yet totally poisoned the American public's mind about the origins and significance of this quaint and most truly American Holiday.

We all know that for democracy to properly function, the public must be properly informed.When the media loses its objectivity, the public loses its way.
And so, like some innocent little Red Riding Hood, strolling through the woods with a basket of goodies for her grandmother, the Western democracies seem Hell-bent on convincing themselves that there's no Big Bad Wolf. And our news organizations seem only too eager to help.

This cartoon is from November 9, 1994. Exactly 12 years ago today. It's about losers.The American President (Clinton, not George W.) had won the election two years earlier, but now Americans seemed unhappy with his government. In those midterm elections (1994, not 2006), the opposition party (Republican, not Democrat) swept to victories in congressional, gubernatorial, and state legislative races across the United States.
And so it goes.The cartoon (above) was published one day after the U.S. 1994 midterm elections turned winners into losers.The analysis (below) of the U.S. midterm elections of 2006, was just published in the Canadian Globe and Mail and refers to those events of November 1994:

"Just 12 years ago, when Ms. Clinton's husband was in the White House, an anti-government crusade led by Newt Gingrich and his fierce band of radical Republican reformers ended four decades of Democratic control in the House of Representatives in midterm elections that turned U.S. politics upside down."- More

Candlelight vigils to stop the execution of Saddam Hussein?
That's my prediction.And I figure that it'll be a real media-fest as the anti-American mob joins the anti-death penalty people and the various conspiracy believers and the leftist-isolationist folk in ongoing TV-covered vigils. Yup.
Just you wait and see! And remember... You heard it here first! 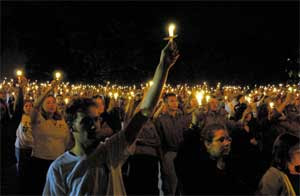 In 1976 Chairman Mao died and the Cultural Revolution ended with the official denunciation and trial of the Gang of Four.The drab uniformed cadres of slogan-chanting Communist students would, thirty years later would be replaced with product-hungry Chinese consumers. 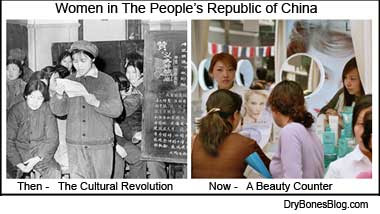 But, incredibly, the Communist Party still remains in total control.And the big question is ...What comes next?
So let me know what your guess is.
Will China:
1. Become a democracy?
2. Fight the Muslims for world domination?
3. Attack America?
4. Dominate the world?
Nu?

Bringing the mass murderer to face justice in a court of law was to be part of the birth of a free and democratic state of Iraq.A birthing that now seems to be going terribly wrong.

History is written by the winners, so in the future, our history books will probably laud Olmert's Kadima government.When that happens, I'll pull out today's cartoon as a "Golden Oldie" to show how we felt at this moment.

Jerusalem, this morning's news:
Religious Jews take to the streets to protest (riot against?) a proposed Gay Pride parade:

Inappropriate for the Holy City?
Religious Jerusalem residents,Christian, Jewish, and Muslim, all seem to be united in their opposition to the parade.So how do you guys out in Blogland feel about the issue?
Nu?

The Clock is Ticking

Here in Israel we are all somehow occupied with other problems. Public figures accused of wrongdoing, local politics, whatever. Thinking of something other than the Iranian threat is, I guess, the subject of the cartoon.Which reminds me...I received an email from a reader who complained about not being able to email postings to others.
There are two separate issues connected with this.
The first is how to add a Dry Bones button to the bottom of the posting at the blog. The second challenge is to deal with the readers who subscribe instead of coming to the site.I spent a few hours trying to figure out how to deal with the first problem (at the blog itself). So if you've come to the blog (rather than having received it by email)you'll notice that now, at the bottom of this post, is a new button for emailing. Try it. Then let me know if it's okay. If this works I'll then redo the ugly yellow button graphics. When I'm done with that, I'll get onto dealing with problem two, the readers who subscribe instead of coming to the site. Wow.
I feel great!
I've just spent several hours not thinking about the Iranian threat.