For info about the history of the Protocols click here.

"The Protocols" was not only a big hit in Nazi circles, it's a now a blockbuster in the Arab world. Below is the cover of the currently best-selling Egyptian version.

Click on the book jacket and we'll take you to an Islamic site where you can read the whole thing yourself... In English, French, German, Swedish, Portugese, Russian, Spanish, or Italian!

In the elecions of 1977 the unthinkable happened. For the very first time since the founding of the state in 1948, Israel's Labor Party lost!
Menachem Begin's Likud party won 43 Knesset seats, compared to Labor's 32.

Menachem Begin became Prime Minister, serving for six and a half years - from the spring of 1977 to the fall of 1983. 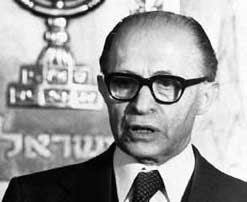 For some reason everyone seems to think that elections are what makes a democracy a democacy. Wrong. There also needs to be freedom of press, speech and religion.

Read the posting at Neo-Neocon or, for the Reuters story, click on the photo below of the accused holding the proof of his villainy. 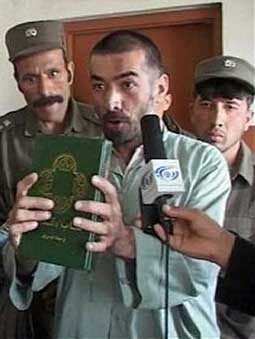 The accused, holding a Bible.

Today is Election Day here in Israel. This Golden Oldie, however, is from way back in 1977. Mr. Shuldig then offered himself as a choice in the national elections of 1977. In this cartoon, on the eve of those elections, he speaks with the deep, inner frustration that every political pro must feel.

Tomorrow, Tuesday, March 28, 2006, is Election Day in Israel.
Today's cartoon expresses what seems to be the generally accepted view held by the electorate.

We already picked our leader, and he, at the time of this writing, is still lying in a coma.

By the way, if nobody comes out with a clear majority, we'll be treated to the spectacle of extended political haggling to create a pasted-together coalition government... Which is the "worse case" outcome referred to in the punchline of the cartoon.

I confess that I often complain that there are no Arab or Muslim voices speaking out forcefully against Arab or Islamic terror.
Well, "Never Again!" as the slogan goes.

You MUST see Arab-American Wafa Sultan on Al-Jazeera TV! It's at the MEMRI TV site.

After you see the incredibly heroic woman on TV, you'll want more information about her. There's an interesting piece at neo-neocon.

By the way, I also often comment on the "fact" that feminists don't speak out about the threat of Islamic repression.
Wrong again.
Check out Free Range Feminist. 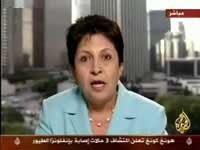 The Israeli system is blessed with "splinter" parties. From the Legalize Pot guys to the Retired People's Party, they offer a choice other than the "main' parties.

In this Golden Oldie, Mr. Shuldig's male pride was injured and he felt personally offended by a campaign promise(?) of the Women's Party.

Click on the photo below for the full story 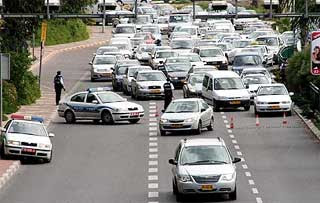 People outside of Israel sometimes have a problem thinking of Jerusalem as being a real place, a real city. Back in 1976 we had a debate about the pros and cons of fluoridation. The dentists won and we got fluoridated.

In this Golden Oldie I had the fun of a pun and at the same time tried to comment on the dual nature of our holy city.

Bird Flu has now been found in Israel.
We're country number fortysomething whose birds have been hit.
The world seems ready for a pandemic of Biblical proportions.
I'm sure that there's a team hard at work on a solution somewhere here in Israel.

I did this cartoon after seeing distressing TV images from around the world of the brutal slaughter of chickens, ducks,and turkeys. The difficulty in doing the cartoon was getting across the idea that I was referring to a cure for the birds rather than for people.

Who knows if this is real?
And if it is, what does it mean?
We're all in the dark, left with speculation as a major spectator sport.
I decided to use my two new "Bar Stool Pundits" characters to make that point in today's cartoon.

I did this cartoon back in 1996.
I was trying to explain what I thought should have been obvious to everyone. Bill Clinton was then the President, so I stuck him into the first panel. That set it up so that it seemed as if Mr. Shuldig (my alter ego) was explaining it to him.
Ten years of terror bombings later, and the West still doesn't get it?!
...And it's still Iran and Syria?!

At the time of this writing I've got no idea if this story will turn into world-wide riots and condemnation of Israel or not... so here's a link to the way it was more than a month before we snatched the killers out of the Jericho Prison.

For an update on what's happening now, check out the piece at DebkaFile.

If you want to see how the PLO is rewriting history and spinning the story (through its various front groups), click here.

To learn about Rechavam Ze'evi, click on his photo below". 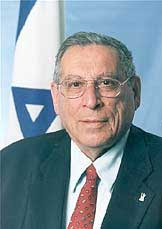 Today is the fun-filled holiday of Purim. This cartoon is from Purim 1997 and shows Uncle Shuldig in a Jester costume, sharing some thoughts and offering a tray of the delicious and traditional three-cornered Purim pastry which in Hebrew are called "Haman's Ears" (oznei haman).
In Yiddish they're called "hamantaschen"

Below is Mr. Shuldig wearing a mask, doing his "Dance of Victory", and rattling his noise maker:

All in the Family

The story about the Saudis is at The Micah Report and at JoshuaPundit.

I titled the post "All in the Family" because of my feeling that this is all about the Bush family business. 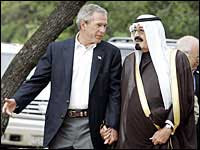 Holding Hands With The Saudis.

I hope the cartoon made you laugh.
Humor is a trick that allows cartoonists and comedians to communicate heavy truths by wrapping them up in jokes.

The "heavy truth" in this case is that we are facing a new appearance of an old familiar monster.

And he's not the Disney version.

When you're a country like Israel and the going gets tough, and the media portrays us like it does, it's no wonder that Hollywood stars, when they come here, make sure to show an "even handedness" between us and our enemies. And how many Hollywood stars would ever come to Israel during a war, to entertain our soldiers?! 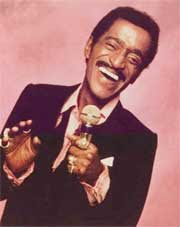 Member of the Tribe.

They Don't Get It.

And Bush is now ready to fight for the Port Deal?
I just don't get it.
So I did this cartoon using my two new characters, the "Bar Stool Pundits".
They don't get it either.

Below are Cliff and Norm from "Cheers".

...also trying to figure it out?

On Jan. 30th 1976, eight Jews who were charged with "disturbing the peace" because they had prayed on the Temple Mount were acquitted by an Israeli court. Ten days later (on Feb. 9) East Jerusalem high schools rioted to protest the court decision. An Arab shopkeepers strike was then launched and rioting soon spread across the West Bank. On February 17th I drew this cartoon.

Abe knows that most congregations raise money for their synagogues by selling tickets at the High Holidays, so he's not surprised when, trying to enter a synagogue, he is stopped and asked if he's got a ticket.
"No" says Abe, "I just want to go in and see if my friend Sam is inside. Let me go in. It'll only take a minute."
"Fine" says the guy at the door, "go in, but don't let me catch you praying!"

Below is a photo taken at Holyland Experience in Orlando, Florida. It shows the Biblical Temple on the Holy Mountain in the city of Jerusalem as it appeared, just before its destruction by the Romans in A.D. 66 (504 years before the birth of Mohammed). For more info and photos click on the picture. 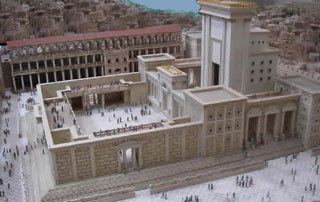 The Oscars. Hollywood seems to be losing it. I'm old enough to remember when the movie industry supported our boys at the front. Patriotic films and animated cartoons unified the country behind what was called "the War Effort". Hollywood stars sold "War Bonds" and popular entertainers put on shows for "The Troops" and visited the war-wounded in Army hospitals.

The change came, I think, when somebody invented the "rogue unit" concept. The enemy, in more and more movies, became a "rogue unit" of some agency of the U.S. government.

So starting with Dr. Strangelove, and the Gov't guys who were after E.T., the bad guys in American movies became, well, uh, the Americans. American patriotism became "right wing" and traditional "family values" became a code-word for reactionary fascism.

My guess is that this Hollywood assault on America and its traditional Judeo-Christian values, helps in selling movies to foreign morkets, where American power as a threat to world peace is an easy sell. 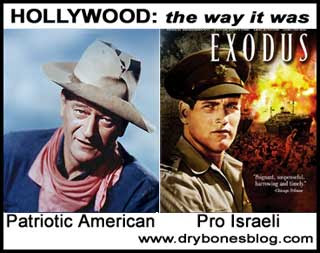 Sometimes I feel the need to simply state what I think the situation is. This is one of those times. Of course that's not so easy. I've been finding the current Israeli election campaign a bore. Election Day is almost upon us. It's March 28th. So why does the campaign lack any fire? Is it because it doesn't really matter who wins? Is it because none of the three candidates is exciting or promising? After several failed attempts I drew Mr. Shuldig stating the obvious. Then, almost without thinking I scribbled in the title.
Missing Sharon.
Suddenly the cartoon "worked".

If you are interested in knowing how Israeli elections work, what are the "rules", and how and why it was decided to have it this month, just click HERE.

When I react to something in the news, I can't be certain that my readers are aware of the item. In those cases I use Mr. Shuldig (or another character) reading from a newspaper. That signals to the reader that the story is "real". In this case I used the device of showing an onscreen TV newscaster reading from a sheet of paper.

In 1976 it appeared to all that the civil war in Lebanon was endangering the continued existence of the Christian community. Then the Syrians stepped in to "save them".

The naive American statement at the time, accepting the purely noble and altruistic motives behind Syria's invasion is mocked in the Dry Bones cartoon.

A year earlier in January 1975, the Syrian minister of information had explained that: "Lebanon will not escape from the destined unity of Syria and Lebanon."

Then, in June 1976 the Syrian troops rolled into Lebanon .

One month later, in July 1976, Syrian Dictator Assad proclaimed that:"through history, Syria and Lebanon have been one country and one people. Our history is one, our future is one and our destiny is one."

A different take on what happened in 1976 is provided by the Guardians of the Cedars of Lebanon" who claim that:

"At the time, Yasser Arafat sent an urgent message to Hafez Assad asking him to intervene and rescue his Palestinian organizations that were faltering under the blows of the Lebanese resistance. The Arabs then issued a call for a summit in Riyadh at the behest of the Saudi regime and its partner the Syrian regime, and decided to send the Syrian Deterrent Forces camouflaged under an Arab cover, and they entered to rescue the Palestinians and not the "Christians as some claim."