Only a couple of days 'til the start of the Jewish New Year and we think about what we learned during the year that is now ending.

In June 1977, Israel's Socialist Labor Party, which had ruled the country since independence, lost the national elections! After 29 years in opposition, Menachem Begin became the very first non-Labor Prime Minister of Israel, and the stage was set for long overdue economic reforms. Prices of everything seemed to rise ...and then the new government cancelled the hated travel tax, which had made the cost of foreign travel prohibitive.
(Lod is the city where our international airport is located.)

The Game In Gaza

Gaza terrorists are playing a dangerous (and dumb) game. Hamas had a "work accident" in Gaza so the "resistance movement" let loose with a barrage of Qassam missiles. Israel responded forcefully and so Hamas "called off" their missile attacks.

Bibi Netanyahu. Back in 1998, Binyamin (we call him Bibi) Netanyahu was Prime Minister of Israel. Everybody had an opinion about him. Nobody was neutral. In 2005 Bibi wants the job back. And once again nobody is neutral.

Gaza attacks Israel. Israel was treated, over the weekend, to a terrifying barrage of 40 rockets fired from Gaza at the small Negev town of Sderot. Hamas, the Islamic "resistance" movement, took full credit for the rain of Qassam missiles. Post-pullout Hamas rocket attacks on Israel were predicted but largely unreported. In attempts to be "even handed" the Palestinian attack was widely reported in the world press only as a "cycle of violence" story or as a "Hamas Ends Military Operations" story after Israeli retaliation. Sad.

War in Europe?!. April 4, 1999. 10 days after NATO began a bombing campaign (including cluster bombs) in the federal Republic of Yugoslavia. At the time we figured that it was the end of the 20th century.
We didn't know that it was the start of the 21st.

Urban legends. I'm not sure if I ever really believed the story of Alligators in the NY sewer system. Incredibly, a NY Times piece from 1936 documents the capture of a NY sewer alligator. But it took the creation of the Internet to really facilitate the rapid spread of unbelievable 21st century urban legends and conspiracy theories.

Mr. Shuldig and his dog, Doobie.
Doobie was a real dog. When he was a puppy he was a beautiful chubby little ball of soft white fur, so we named him Doobie, Hebrew for Teddy bear. He grew up to be a scrawny little white dog with hair like stiff bristles and a black patch around his left eye. He was also super intelligent and my pal. Shuldig sometimes comes across as too idealistic or saccharine. So I gave him Doobie to act as a "realistic" counterpoint to his innocence. The "real" Doobie died a number of years ago at the ripe old age of 17, but he lives on in the comic strip. And in my heart.

Chaos on the Border

Chaos on the Border. With the Israeli towns and villages uprooted and the Israeli army pulled out, the only thing that can stop the flood of Gazans into Egypt is the Egyptians. Everyone in the Middle East, from the United Arab Emirates to Jerusalem is watching the latest developments as Gazans pour across the border into Egypt.

The IDF is the Israeli army. Hutzpa is gall, audacity, brazen, or impudent behavior.The cartoon explains what Yesh Gvul did. Sort of. Israeli NewsSite Ynet News reported the story more fully and less passionately. But hey, cartoonists are not known for lack of passion. Yesh Gvul's actions make me mad! Let me explain.

"14 July 2004, 110 Palestinian children, taking part in a summer camp in the West Bank city of Hebron, survived death on Tuesday after drinking poisoned water taken from a well apparently spoiled by a mob of Israeli settlers who were usurped Palestinian-owned lands in the Yatta Town, south of the city.

Altewani village’s mayor, Saber Alhareeny, stressed he witnessed four armed Israeli illegal settlers roaming around the spoiled well, then it was clear that the water was poisoned with strange chemical substances and dead chickens."

The respected British newspaper, the Independent, cleverly combines the water libel with Jewish "cheapness." Disguising the Jew-hatred as righteous condemnation of the Jewish State allows Jews themselves to take part in the Jew-bashing. And so now we have Yesh Gvul taking part in the international festival of Jewish State-bashing.

Allies. America, Israel, and India. The above cartoon is from November 24, 2001. It's as true today as it was then... except that now there's this Israeli flirtation with America's "friend" and India's enemy, Pakistan.

Are they teasing us? Are there new moves towards peace? What's going on? The situation is driving us crazy.

The fiend who killed more Jews than anyone since the Nazis is dead. He died, a Nobel Peace Prize laureate, in a cloud of myth as thick as the myths he built during his lifetime. Born in Cairo, his name was Mohammed Al Qudwa and if you really need to know more about his life, click here or (about his death) click here. Was he gay?. What about the missing millions?
For me the last unkind cut was the Suha Arafat email scam that dropped into my email inbox.

The above cartoon was done on October 26, 1994. It marked the euphoria that swept Israel after the July 1994 White House handshake between Rabin and King Hussein announced an Israeli/Jordan peace. 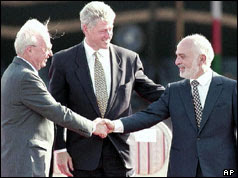 These days, once again, (this time following the Gaza "Disengagement") Israel is bubbling with on and off reports of peace with Pakistan, a visit by Egyptian President Mubarak, normalization, etc.
Once again we've got to figure out if they still want to drive us into the sea or at last welcome us in friendship.


To see a video of the July 1994 Hussein/Rabin handshake click here.
If you don't have a free "real player" on your computer just click here to get one.

Having expelled the Jews from the Gaza Strip and having moved the Jewish graves to Israel, comes the question of dealing with the abandoned synagogues according to Jewish Religious Law (Halacha). Israel's High Court of Justice was called upon to make a ruling.
As to the "72 virgins" they promise to the kids, some folks think it's a misunderstanding, and that the heavenly reward promised by the Koran is actually 72 grapes.
Grapes?!

Negative campaigns have a (dare I say it?) negative effect on the public. And that includes me! Each candidate “proves” that the other is incompetent, not up to the job, and a danger to the country (or state, or city). It means that the voters end up (if we’re lucky) with the least bad of our choices. And what ever happened to the idea that after the elections we’re supposed to rally ‘round the winner, who then becomes the Prime Minister (or President) of all of us? Maybe I’m just naïve and simplistic. Maybe that’s what you have to be if you want to be a political cartoonist.

We've got this problem with our leaders. They just won't follow our lead. This cartoon was done on March 6, 1995. Yitzhak Rabin was the Prime Minister who was then considering a withdrawal from occupied territories without a nation-wide referendum.
Incredibly, just ten years later, Ariel Sharon, the godfather of Israel’s right wing, would be the Prime Minister who unilaterally withdrew from occupied territories, refused to have a referendum on the matter, and was denounced for being “undemocratic.”
Like I say, we elect our leaders and then they just won’t follow our lead.

Israel does not have a constitution. The 1948 Israeli Declaration of Independence envisaged the enactment of a constitution within "several months". Six hundred eighty eight months have now gone by (as of today). What happened was that in January 1949 we elected our first national assembly and, as the Jewish Virtual Library explains...


"the assembly’s first action was to pass the so-called Transition Law, by which it reconstituted itself as the 'First Knesset.' A protracted debate ensued between the proponents of a constitution – those favoring immediate enactment of a constitution – and its opponents, some of whom ruled out the very idea of a constitution, while others argued that the time was not ripe. Finally, the Knesset adopted a compromise resolution – in effect, a decision not to adopt a constitution. This resolution (1950), is known as the 'Harari Resolution' after its sponsor, MK I. Harari."

The idea of an Israeli constitution has now become a political football. For a peek at both sides of the still ongoing argument, click here.

In April 1996, Israel launched a military operation called "Operation Grapes of Wrath." It was an attempt to crush the Hizbullah terrorists in Lebanon. It, like George W’s invasion of Iraq, split the public and caused a great national debate. At the time I heard some after-dinner speaker close with the line "Speeches are like love affairs, any fool can start one but it takes a lot of skill to end one gracefully." The line had obviously been taken from some book on after-dinner speaking. It occurred to me that the comment was as true about war as it was about public speaking.

In 1898 Mark Twain wrote an essay suggesting that anti-Semitism was caused by the belief (and fear?) that Jews were superior. Perhaps a similar belief that Americans are superior explains the current level of international anti-Americanism. Maybe that’s why the world was so shocked by the 3rd world violence and the bungled rescue efforts in an American disaster zone. Americans, like Israelis, are supposed to be “better” than other people.

It suddenly hit me! At last, we actually were guilty of driving people out of their homes, creating a (dare I say it?) refugee problem, etc. etc. etc.
It's comforting, because having now done it, we can now appologize.
But to whom?
Everyone's applauding us for having finally done it?
A cartoon done out of total confusion.

The above 1997 ‘toon showed the public (represented by Mr. Shuldig, my alter ego) being beaten up by the privatization of big government corporations. The idea at the time was that the public would suffer in the short run, but benefit in the long run. Exactly what the Netanyahu-instituted and hotly debated 21st century reforms are now promising the Israeli public.

Prior to the July 1997 reform, the national telephone company Bezeq had a monopoly on international telephony traffic and the price of a call to family back home in America or the UK was prohibitive.
In 1996 our upset at Bezeq (Hebrew for lightning) was widespread. Bezeq was the company we loved to hate. A lot of Israelis began to refer to the monopoly as Nezeq, (Hebrew for damage)

There are now 3 international operators in Israel: Golden Lines, Barak and Bezeq International. The price of international calls from Israel has gone from outrageously expensive to quite reasonable (even cheap), although in recent years the price is creeping up.

The Israeli telecommunications industry is now ripe with competition.
Today Bezeq is threatened (challenged?) with competition in the local (land line) phone service market. And Bezeq itself is still about to be privatized, and the implications are still being debated.
I for one can’t wait.