Jordan and Israel to Bypass PLO? 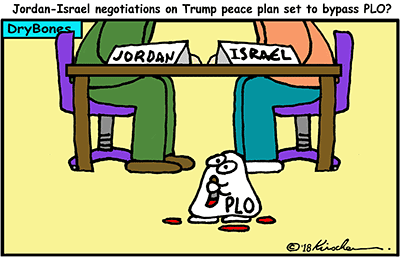 According to Canada Free Press:

Jordan-Israel negotiations on Trump peace plan set to bypass PLO
By David Singer
Jordan-Israel negotiations based on President Trump’s long-awaited peace plan seem increasingly likely to happen - following retired Jordanian Ambassador and former editor of the Jordan Times – Walid Sadi – flagging Jordan’s legal and sovereignty claims in the West Bank (Judea and Samaria) and East Jerusalem (“disputed territories”).Sadi - in an op-ed article in the Jordan Times on 12 August - has forcefully argued that Jordan’s decision to cut off all legal and administrative relations with the disputed territories in July 1988 did not amount to Jordan ceding its claims to sovereignty for the following reasons:“First of all, the unity of the West Bank with the East Bank was officially and constitutionally adopted on 24 of April 1950. No one disputes this fact. The Constitution of the country at the time was the 1952 Constitution, which stipulated in no uncertain terms that no part of the Kingdom shall be ceded, period. This provision makes the 1988 decision to cut off all legal and administrative relations between the two banks stopping short of ceding the West Bank to any side whatsoever. Any other interpretation of the 1988 political decision is absolutely untenable constitutionally.”The Jordan Times is published by the Jordan Press Foundation – in which the government-owned Social Security Investment Fund has a majority stake. Wadi’s politically-charged and highly-significant article could only have been published with the knowledge and approval of Jordan’s King Abdullah.-more