Trump,Putin and what happened at Helsinki 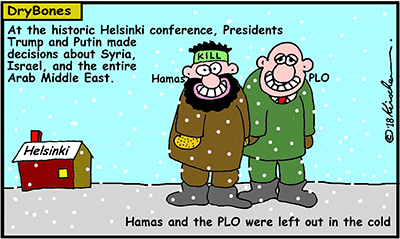 According to Arutz Sheva:

Trump and Putin may attempt a return to pre-PLO and Hamas days
The 1964 PLO Charter said: “This Organization does not exercise any regional sovereignty over the West Bank in the Hashemite Kingdom of Jordan, on the Gaza Strip or the Himmah Area..." Good idea.
By David SingerDefusing the Syria–Israel conflict and resurrecting the primacy of Security Council Resolution 242 in resolving the Arab-Jewish conflict have emerged as positive outcomes from the Trump-Putin summit in Helsinki this week. -more