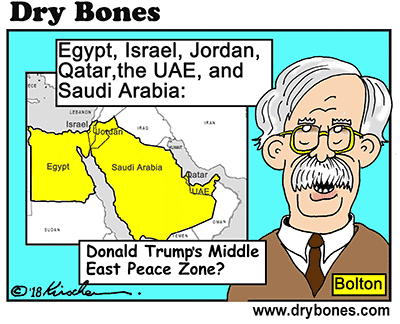 Trump’s Bolton-appointment signals curtains for Abbas and PLO
By
David Singer
President Trump’s appointment of John Bolton as National Security Adviser flags the possibility that the centerpiece of Trump’s eagerly-awaited “ultimate deal” could involve the subdivision of Judea and Samaria (“the West Bank”) and Gaza between Israel, Jordan and Egypt.

Such tripartite negotiations would replace the stale-mated Israeli-Palestine Liberation Organization (PLO) negotiations – begun in 1993 until suspended in 2014 following a PLO walk-out – at the stage where:
1. The PLO was demanding a new Palestinian Arab State with Jerusalem as its capital in 100% of the West Bank and Gaza (“disputed territories”) for the first time in recorded history – which was unacceptable to Israel.
2. Offers by Israel in 2000/2001 and 2007 to cede its claims to sovereignty in about 95% of the disputed territories had been rejected by the PLO.
3. The 1993 Oslo Accords had seen the West Bank divided into three Areas - “A”, “B’ and “C”: • “A” (18%) - under total PLO administrative and security control. • “B” (22%) - under total PLO administrative control and joint Israel-PLO security control • “C” (60%) - under total Israeli administrative and security control
4. Israel and the PLO had been negotiating the final status of the disputed territories under President Bush’s 2003 Roadmap - endorsed by the United Nations, the European Union and Russia. President Bush had given Israel written commitments on 14 April 2004 – overwhelmingly endorsed by the US Congress - to support Israel’s unilateral withdrawal from Gaza – which Israel honored in 2005. America committed it would not expect Israel to withdraw from 100% of the disputed territories. 5. Hamas had governed Gaza since 2007 –as Egypt had between 1948 and 1967.

Enter Trump-appointee John Bolton into this Israel-PLO standoff – as President Trump ponders how to fill this negotiating void. Bolton has an answer - provided with amazing prescience on 5 January 2009 in his Washington Post article headlined “The Three-State Solution”: “Let's start by recognizing that trying to create a Palestinian Authority from the old PLO has failed and that any two-state solution based on the PA is stillborn. Hamas has killed the idea, and even the Holy Land is good for only one resurrection. Instead, we should look to a "three-state" approach, where Gaza is returned to Egyptian control and the West Bank in some configuration reverts to Jordanian sovereignty. Among many anomalies, today's conflict lies within the boundaries of three states nominally at peace. Having the two Arab states re-extend their prior political authority is an authentic way to extend the zone of peace and, more important, build on governments that are providing peace and stability in their own countries. "International observers" or the like cannot come close to what is necessary; we need real states with real security forces.” Bolton still retains these views – telling Eric Shawn on 21 January 2018: “I hope at some point the Administration recognizes and perhaps it is already quietly – that the two-state solution isn’t going anywhere. If anything I would say to King Abdullah of Jordan – “Be prepared to reassert Jordanian sovereignty over part of the West Bank – negotiate with Israel”. I think that’s a far better outcome than the continued pursuit of a mythical – I believe – unattainable viable Palestinian state” Saudi Arabia’s backing can be anticipated. Bolton’s appointment is shaping up as yet another Trump-inspired circuit breaker. Trump’s decision to accept Bolton’s advice would spell curtains for Abbas and the PLO and give Trump the momentum he needs to get meaningful Israel-Arab negotiations started.
[Author’s note: The cartoon - commissioned exclusively for this article – is by Yaakov Kirschen aka "Dry Bones"- one of Israel's foremost political and social commentators - whose cartoons have graced the columns of Israeli and international media publications for decades]