The latest furor in Israel is about demands by "Haredim"(falsely identified as "ültra Orthodox"). What they now want is buses segregated by sex. i.e. women to the back of the bus. So I did this cartoon suggesting that they wear blindfolds. Funny, no? "No" says the LSW (Long Suffering Wife). She says it's been done. She says that some Haredi men have been spotted wearing veils!! I pooh-poohed the notion, but did a google image search, just to check. Turns out she was right. 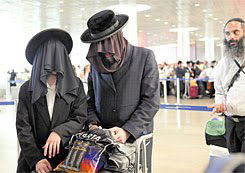