Just before the war, we noted Nasrallah's explanation that Israeli and Jewish weakness was centered in our unwillingness to sacrifice our children. Click on MEMRI to check it out ...oh, and while you're there, be sure to look at the MEMRI video clip.
- - - - - - - -
Another thing to check out is the growing suspicion that the Kana (or Qana) bombing that horrified the world with its images of the broken bodies of dead Lebanese children may, in fact, have been a fraud ?!!?.
Here's more on the "fraud".
- - - - - - - -
And while we're at it, how 'bout this?!:

"Do you remember the Mohammed al-Dura video footage? The Muslim world does. The video shows a Palestinian father and son cowering against a wall, apparently taking cover from what sounds like an erratic spray of bullets, allegedly coming from IDF soldiers. The next scene in the video is of the father slumped over, as if injured, and the boy lying down, his face in his hands, apparently dead. Inexplicably, the actual shooting of the boy is not on the video, rather there is a cut to the end result.
The French reporter, Charles Enderlin, who presented the story on French television, claimed later that the actual shooting to death of Mohammed al-Dura was edited out because it was too gruesome. Karsenty asserted to France 2 that the entire video had been staged.
A simple Internet search of "Mohammed al-Dura" will turn up not only the many pro-Palestinian sites dedicated to the memory of their martyr, but analyses from several different sources explaining why the video is so phony it may as well have been performed by the puppets from "Team America: World Police." 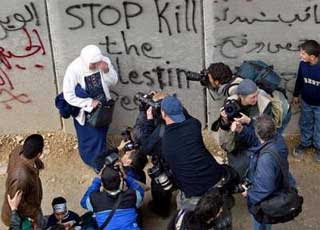 Posing at a wall section of Israel's Security Fence for the Western Media.