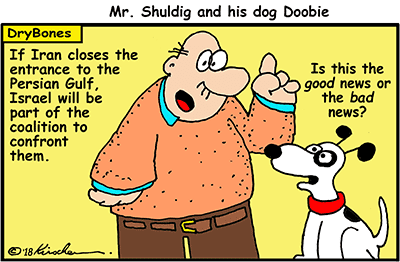 According to The Times of Israel:

Prime Minister Benjamin Netanyahu warned Iran on Wednesday that Israel, together with an “international coalition,” would not allow the Islamic Republic to close a key regional waterway.
Speaking to graduates of the Israel Navy’s elite captains’ course at its naval training base in Haifa, Netanyahu said, “At the beginning of the week we witnessed a serious clash with Iran’s proxies who tried to obstruct international movement in the straits at the entrance to the Red Sea.”
He added: “If Iran tries to block the Bab Al-Mandab Straits, I’m convinced that it will find itself facing a determined international coalition to prevent this.
“This coalition would include Israel,” he promised the 36 newly-minted naval commanders, “in all its branches.”-more