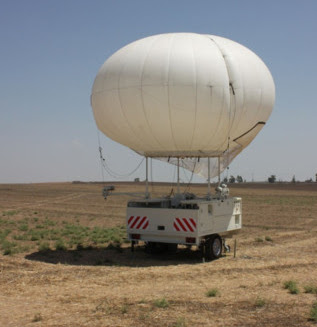 Dec. 02--Leaders from all over the world gathered this week in Paris for the Climate Change Conference, which was clearly also utilized for diplomatic and security meetings. A surveillance balloon made by Israeli company RT Ita Systems -- a small mobile tactical balloon system suitable for tactical intelligence missions and military and civilian security missions -- provided security for this high-level event. The Skystar 180 tactical aerostat system developed by RT is already in use in communities near the Gaza Strip and on Road 443 between Jerusalem and Modi'in. The system can carry up to 20 kilograms, and provide prolonged intelligence coverage of all events from a height of up to 300 meters. The system is operated by only two people, and can operate in different weather conditions and remain airborne continuously for up to 72 hours. The balloon system used in Paris is equipped with a special TR-Stamp load for surveillance made by Controp -- an independent light balloon that is easy to change and economical to use for diverse military operations, and also for civilian purposes. RT Ita emphasized that the Skystar 180 balloon is being used for intelligence tasks in a number of countries, and is regularly operated by the IDF and Israel Police. For the Climate Change conference, the company trained local police personnel and cooperated with French company SSI. Skystar surveillance balloon systems are independent, economical to use, and very easy to transport. RT Ita's products are patent protected. 40 of the company's balloon surveillance systems are in use in 10 countries, including Israel, Canada, the US, Russia, Thailand, Afghanistan, Mexico, Columbia, and African countries, where they have accumulated over 500,000 operational hours. Copyright 2015 - Globes, Tel Aviv, Israel

* * *
The Dry Bones Online Academy of Cartoon Advocacy and Activism is now open! For info about it, to donate to it, or to apply to be a student take a sneak peek: www.drybonesacademy.com