"What else could possibly go wrong? We were soon to find out."
-the closing entry in previous Diary Episode 02

New Print Run!
Our printer agrees to do a new print run with careful quality control!  But we'll get the Haggadahs just hours before the opening of the  General Assembly of the Jewish Federations  where we've taken a Dry Bones Haggadahs booth to launch our "campaign to make our Haggadah THE Haggadah for 2014 and generations to come".

Back to Work!
as explained previously, Kim, our talented book designer and cover artist had come to visit so we could work on designing the Dry Bones Haggadah "roll up" standing sign for our booth at the  GA. ...and so we settled down to do just that. We've already done a large cartoon backdrop for the booth which shows Mr. Shuldig and a Haggadah. It is wider than it is tall. The "roll up" is taller than it is wide. I'll have to redraw the picture so that it is vertical. Simple.

The Blessing:
In Israel rain is a blessing. The land, after our long hot summers yearns for the refreshing water of our rainy season. And so, suddenly the skies opened and thunderstorms broke out. Unfortunately the brief torrewntial downpour took out the electricity in our neighborhood. Kim's computer could continue on battery power but how could I draw in the pitch blackness of the total darkness? By the way, pitch blackness in contemporary Hebrew is "Egyptian Darkness" pronounced Hoshech Mitzrayim  ( referring to the Passover plague that the Egyptians were hit with). Hmmm.

And So:The LSW held a flashlight while I drew the line drawing to scan which Kim could then color on her Mac. So far, so good, but then, having drawn the cartoon, we realized that without electricity the scanner wouldn't scan! Kim came up with the answer. I held the flashlight to light my drawing, while she shot the cartoon with her iphone and then emailed it to herself, and opened it on her Mac.

The LSW snapped a photo of Kim and me. Her flash has illuminated the total darkness. Kim is on the left facing the bright screen of her laptop Mac: I am to her right on a couch, behind one of the many many candles  that the LSW had set out. One is tiny and on the floor (bottom right, next to chair leg) a third is above and behind that. 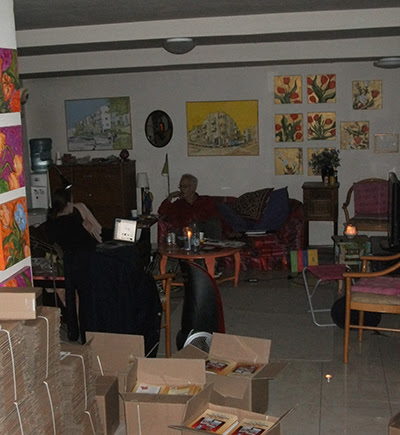 Below is the drawn-in-the-dark "roll up" sign after Kim's coloring. Not bad.

You can get your set of haggadahs (in plain brown boxes) in one of two ways. One, online at the http://store.drybones.com and two, at our booth at the upcoming General Assembly of the Jewish Federations to be held in Jerusalem on Nov 10-11.