A couple of weeks ago, the organizers of an Israeli exhibition of cartoons about Theodore Herzl asked me to submit a cartoon for the show. Today's cartoon is what I drew and sent to them.
* * *
After the establishment of the State of Israel, Zionism faced questions like "What's left for Zionism to do?" and challenges like "If you want to be a Zionist go live in Israel." I think that Zionists now, especially after the Olmert government's shameful decision to continue its policy of appeasement (even after the Yeshiva murders) have our answer. World Jewry needs to rediscover the Zionist dream. To understand that the State of Israel is a political entity which was set up to manage the Jewish homeland on behalf of its owners. Herzl's message seems even more revolutionary today than it was back then.So what next? Do we need a new Zionist Congress?! Could the Jewish Agency and the Jewish National Fund rededicate themselves as representatives of World Jewry? Do we need to start a new 21st century Zionist movement?What do you think? 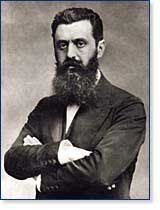