Here in Israel it's "back to school" days at local stores, markets, and shopping malls. Naturally my mind turned to the question of the approaching start of the new school year for Palestinian kids.
* * *
An "incident" just took place in Jenin when an Israeli soldier took a wrong turn and drove into the West Bank Palestinian town:

"The Jenin incident took place Monday afternoon, when local Palestinian residents who noticed the officer driving into the city hurled rocks at his car, forced him out and began beating him. A Palestinian policeman spotted the angry mob and called for backup. The security officers struggled to reach the battered officer and several shots were apparently fired before they managed to extract him from the crowd moments before his vehicle was set aflame."-more

The bloodthirsty mob was apparently led by crowds of crazed, hate-filled youngsters who had grown up in the school system of Palestinian "moderate" Mahmoud Abbas.The West Bank. Not Gaza!
* * *
Flash!! Update!! I just found a picture of the Jenin "incident" in which West Bank Palestinians failed in their attempt to lynch an Israeli driver. The news photo shows the torched car of the Israeli in flames. Is it me or does the kid in the blue shirt in the news photo look like the kid in the blue shirt in my cartoon? 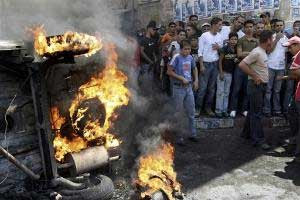