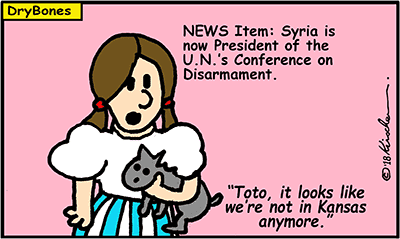 The U.S. State Department voiced outrage on Tuesday over the Syrian government’s assumption of the presidency of the U.N. Conference on Disarmament for the next month, saying Damascus lacked credibility to preside over the body because of its use of chemical weapons.“We are outraged at the Syrian regime’s blatant disregard for human life, its serial violations of and contempt for its international obligations and its audaciousness in assuming the presidency of an international body committed to advancing disarmament and non-proliferation,” State Department spokeswoman Heather Nauert told a briefing. “Syria lacks the credibility to assume the presidency.”