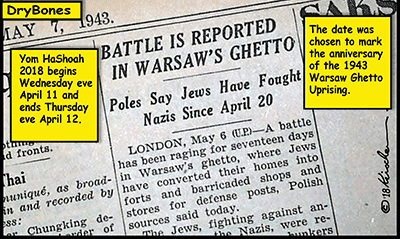 The background of today's image is the New York Times May 7 1943 report of the Warsaw Uprising.The Jewish holiday of Yom HaShoah ( Holocaust Martyrs' and Heroes' Remembrance Day) is a national day of commemoration in Israel, on which the six million Jews murdered in the Holocaust and the Jewish resistance to the Nazis are memorialized. In Israel, it is a national memorial day. On the evening which begins the observance, there is a state ceremony at the Holocaust Martyrs' and Heroes Authority, Yad Vashem. At 10am on the day of Yom HaShoah, air-raid sirens are sounded and people across the country stop what they are doing and stand at attention in respect of the fallen.. Places of public entertainment are closed and flags on public buildings are flown at half mast. The original proposal was to hold Yom HaShoah on the 14th of the Hebrew month of Nisan, the date of the Warsaw ghetto uprising (April 19, 1943), but this was problematic because the 14th of Nisan is the day immediately before Passover. The date was therefore moved to the 27th of Nisan, which is eight days before Yom Ha'atzma'ut,(Israeli Independence Day)In 2018 Yom HaShoah begins in the evening of Wednesday, April 11 and ends in the evening of Thursday, April 12.