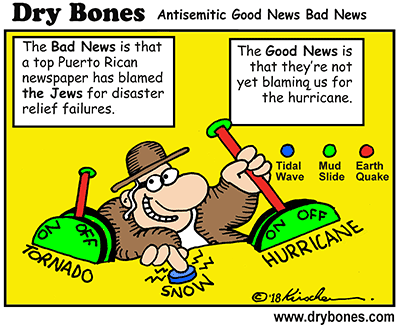 A column published by Puerto Rico's most circulated newspaper said disaster relief decisions on the island are controlled "behind closed doors" by "the Jews." Wilda Rodriguez, a columnist for San Juan's El Nuevo Dia, writes in the piece "What does ‘the Jew' want with the colony?" that "the Jews" are the "secret structure that rules the United States … behind closed doors.":"We need to know who is being called on to make the decisions," Rodriquez wrote, according to a Washington Free Beacon translation. "I am speaking here of the secret structure that controls the United States exclusively for the elite.""Only behind closed doors do the most elite politicians speak of the power of the American people as a parallel government organized by the forces of wealth and violence (the war machine) from Wall Street," Rodriguez wrote. "It is not Congress. The Congress will in the end do what ‘the Jew' wants. So what does ‘the Jew' want with the colony?" she wrote. "That is the question." -more