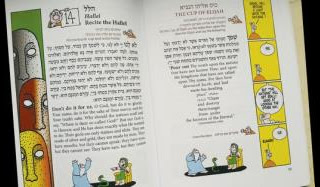 Just in; a review in the Jerusalem Post!
The Jerusalem Post Magazine
The secret book of the Jews
03/27/2014 15:28   By MARION FISCHEL
Dry Bones enhances the Seder with the Haggadah of the future.

The Dry Bones Passover Haggadah is a must-have. It renews the Seder experience, which accords with the rabbinical precept of reliving anew the exit from Egypt.

Firstly, it is the delight of owning a whole comic book by Dry Bones the political cartoonist of The Jerusalem Post since 1973. Then, the visual and tactual effects, the vivid colors, the glossy, bendy cover – designed by S. Kim Glassman. The love and care that have gone into it are palpable.

Yaakov Kirschen, its creator, explains that he designed the book to be held with thick staples at the center to enable it to be opened flat and enjoyed, without the seams eventually coming apart from cheap glue. The pages are purposely not glossy, he says, so that when wine is spilled on them, it will stain.

He and his wife, artist Sali Ariel, decided not to produce in China and sell on Amazon, but to print in Jerusalem, with Jewish workmanship, to create an authentic Haggada.

The book is full of delightful discoveries.

Kirschen hides symbols in his caricatures, he uses cadence to join together scenes on different pages, he builds up to his message, he follows the rhythm of the Haggada; he even uses Talmudic layout traditions.

And a kosher and useful Haggadah it is too, with all the blessings and instructions being clearly written in Hebrew, English and, in the case of the blessings, in Hebrew transliteration. There’s no getting lost in this version, unless it’s among the inimitable illustrations of the grand master of satire and subtlety.

Throughout, his comics decorate and comment, take us on a journey of past, present and future, make us feel the slavery in Egypt, the parting of the sea, the hiccup of the golden calf, Joseph’s dream, the story of Tamar, the Land of Milk and Honey, the plagues of course, the moments of reciting Had Gadya and Who Knows One?.

It is the most exciting Haggadah to have come out since, who knows when? “Everyone knows that the Jews have survived as a people, and nobody really knows why. They think we have a secret book.

And we do. We have a guidebook for a ceremony that we do in our homes [to teach] the next generation,” Kirschen says.

“The Haggadah is a real history of the Jewish people and a guide to the future.

It is the one book that gets passed down from family to family, generation to generation,” says the father of three and grandfather of eight.

“It keeps tradition alive throughout all periods of Jewish history. It tells the real story of the Jewish generation. It is a legacy of continuity,” he says. “How many Jews read the Talmud or the Zohar or the Bible? But if you’re a Jew, whether you are religious or not, you will find yourself at a Seder table with other Jews.”

Kirschen is “shocked” to see how his book has gained popularity as a gift since its release last year. Those who order one for themselves return again and again to buy as presents for friends. One person has reordered 22 separate times.“People thought it would just be a fun Haggadah,” he says, but it has become “the gift of Jewishness.”

“We are rapidly going to pass into history and it is at this historic moment that it is important to pass on the message to young people,” he notes.

Back in the ’60s, Kirschen recalls, he belonged to an underground comix movement in the US, and drew “radical Zionist cartoons.” After doing that for a couple of years, he decided to follow his “own advice, and come here.”

In Israel, he “sort of fell into” his gig as Dry Bones, and set the past aside. But after 40 years of Dry Bones, as opposed, he says, to the 40 years in the desert – he decided to celebrate by making this Haggadah.

“After 40 years,” he says, “ I realized that there were two me’s.” The Israeli one and the “English-speaking Jew living in galut.”

Therefore, he says, “This Haggadah is a collaboration between who I am now and who I was then. It is equally exciting to someone who has never lived here as to one who does.” And “whoever is going to seriously investigate [in the cartoons in this Haggadah] is going to find things.” Such as the Solomonic star on King Solomon’s crown and the pair of birds that flutter above the Israelites in the desert.

For Kirschen, his Haggadah is “a way to speak to the future and to each other.”

The Haggadah is available from www.store.drybones.com