It all began with boycotts. Boycotts that were taken to defend against an imaginary Jewish threat. For info about the Nazi BDS program I turned to the History Place to track events of 1933: 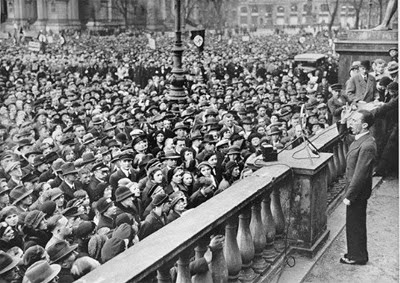 Above: Nazi Propaganda Minister Joseph Goebbels delivers a speech to a crowd in the Berlin Lustgarten urging Germans to boycott Jewish-owned businesses. He defends the boycott as a legitimate response to the anti-German "atrocity propaganda" being spread abroad by "international Jewry." Below: Nazi storm troopers block the entrance to a Jewish-owned store. Their signs read: "Germans, defend yourselves against the Jewish atrocity propaganda, buy only at German shops!" and "Germans, defend yourselves, buy only at German shops!" 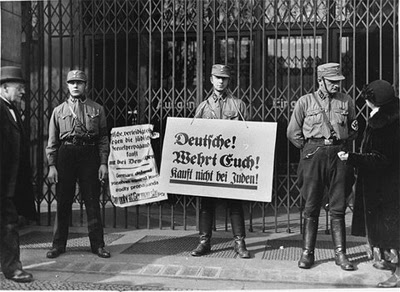 On April 1, 1933, a week after Hitler became dictator of Germany, he ordered a boycott of Jewish shops, banks, offices and department stores. But the boycott was mostly ignored by German shoppers and was called off after three days. However, the unsuccessful boycott was followed by a rapid series of laws which robbed the Jews of many rights. On April 7, "The Law of the Restoration of the Civil Service" was introduced which made 'Aryanism' a necessary requirement in order to hold a civil service position. All Jews holding such positions were dismissed or forced into retirement. On April 22, Jews were prohibited from serving as patent lawyers and from serving as doctors in state-run insurance institutions. On April 25, a law against the overcrowding of German schools placed severe limits on the number of young Jews allowed to enroll in public schools. -more

And it all began with the supposed victims fighting back with what they claimed was a legitimate response ...an anti-Jewish boycott to "defend" against the Jewish "threat".