I've always been fascinated by the variety of human religious belief systems, but the Yazdi (Yezidi, Yazidi,...) was a new one on me. According to Wikipedia:


"The Yezidi faith contains elements of Manicheism, Islam, Christianity, Judaism and Gnostic and pre-islamic beliefs. It might be based on the original religion of the Kurds. In about 1162, Sheik-Adi Ibin Mustafa radically reformed the religion, so that some believe the previous form was a different religion from current belief. Different clans may also have different interpretations.According to Yazidi, Malak Taus is a fallen peacock angel who repented and recreated the world that had been broken. He filled seven jars with his tears and used them to quench the fire in Hell. Although primarily monotheistic religion, Yezidism also includes minor deities and saint Shaykh Adii who cooperates with Malak Taus.Malak Taus is also connected to the name Shaytan, which is similar to Muslim name to Devil and therefore they have been accused of devil worship. Because of this and due to their pre-Islamic beliefs, they have been oppressed by their Muslim neighbors and the Ottoman Empire."-more

* * *
The world of comic book superheroes does not ignore the Yazdis! Here's an incredible website that lists all the superheroes by religion (Yes, you can find out who's Jewish, or Seventh Day Adventist, or whatever) ...and the Yazdi superhero (King Peacock) is here. 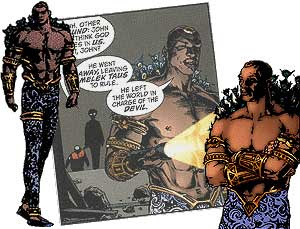 So tell me, who's your favorite superhero?Hmm?