"In light of the heated controversy that has surrounded the Turkish-Armenian issue in recent weeks, and because of our concern for the unity of the Jewish community at a time of increased threats against the Jewish people, ADL has decided to revisit the tragedy that befell the Armenians.We have never negated but have always described the painful events of 1915-1918 perpetrated by the Ottoman Empire against the Armenians as massacres and atrocities. On reflection, we have come to share the view of Henry Morgenthau, Sr. that the consequences of those actions were indeed tantamount to genocide. If the word genocide had existed then, they would have called it genocide."-more

So how big is this story in Turkey? Here's today's front page of a Turkish paper, the New Anatolian. The ADL story is one of the "Three Setbacks in a Day" headline. There are also several columns about it. Too small for you to read? Just click on the image and we'll open up a bigger (big enough for you to read) scan of the front page. 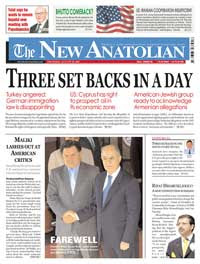 click to enlarge
So what's YOUR reaction to the whole story?What do YOU think? Nu?Oh, and was the bigger front page large enough for you to read?