Yup. Hillary has jumped into the race for the presidency. There's some thinking that she's been pushed by circumstances into announcing prematurely. Check out Dick Morris says Hillary is in Trouble at YidWithLid.Speaking of "Trouble", will anybody remember Hillary embracing and kissing Suha Arafat immediately after Mrs. Arafat's outrageous anti-Israeli blood libel? As MEMRI reported:

"On November 11, 1999, during a Gaza appearance with First Lady Hillary Rodham Clinton, Suha Arafat, wife of Palestinian Authority (PA) Chairman Yasser Arafat stated: "Our people have been subjected to the daily and extensive use of poisonous gas by the Israeli forces, which has led to an increase in cancer cases among women and children."
-more

"Clinton’s early support for Palestinian statehood rankled the Israeli government as well as supporters of Israel at home, so on her next trip to the West Bank the following year she choose not to meet with Arafat, just his wife. But her meeting with the Palestinian First Lady was even more disastrous. Hillary listened attentively as Suha Arafat bizarrely accused Israel of poisoning Palestinians with toxic gas—causing cancer among children and miscarriages among women—and as other Palestinian Authority officials called for a Palestinian state with Jerusalem as its capital. After the remarks, Clinton embraced Mrs. Arafat and kissed her on the cheek. She did not reply to the anti-Israel harangue until, after outcry by Israeli Prime Minister Ehud Barak and American Jewish leaders, Clinton lamely offered, 'I do not believe any kind of inflammatory rhetoric or baseless charges are good for the peace process.'”
- more 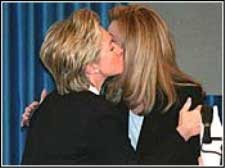