On the (Israeli) Beach

"On the Beach" was the 1959 movie of the best-selling novel by Nevil Shute. The premise is that a nuclear conflict has taken place and all humans are dead with the exception of those living in Australia, which was far from the action.Here in Israel, in 2006, on our beach, we are not "far from the action".
We are at ground zero, Iranian nuke threat-wise.Below is the poster from the classic movie 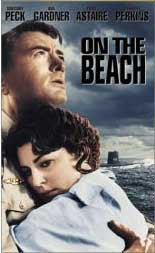 The movie had Gregory Peck and Ava Gardner on the beach.
My cartoon has Mr. Shuldig and his dog Doobie on the beach.The way I came up with the cartoon was like this: I had gone with a group of friends to a concert at Apollonia (remains of a Crusader fortress/city built on what had earlier been a Roman town, and before that had been an ancient Greek city) on Israel's Mediterranean beach.

The concert ended at sunset, and we watched in awe as the sun sank into the sea. As the red ball of the setting sun lit up the sky with streaks of fiery red, orange and purple, I blurted out "It's like a near-miss with an Iranian nuke!"
Everyone laughed... And then fell silent.When I got back home I drew the cartoon.
The strip uses the technique of playing Mr. Shuldig's optimism against Doobie's cynicism. It's a technique I've used many times over the years.